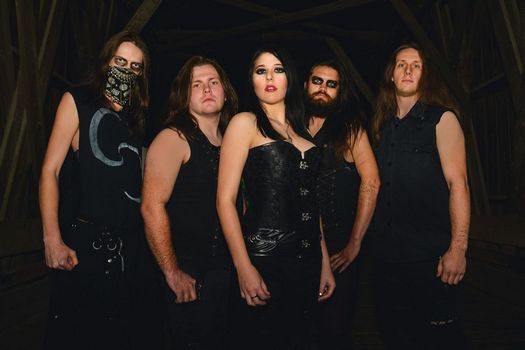 Even with the drought of material that tends to come with the last month of the year, December usually works as a time to start the promotion for early 2018 releases. In other words, there’s just as many great videos that find a release in the twelfth month of the year as any other. So before we completely bid farewell to 2017, here’s one more batch of videos to enjoy. This month’s picks are AfterTime (pictured above), Corrosion of Conformity, Deathwhite, Galactic Empire, Iced Earth, Master Sword, Orphaned Land, Persona, and Visions of Atlantis.

AfterTime
“Masquerade (Through the Facade)”
World We’ve Lost
Self-Released
Successfully funded from an Indiegogo campaign last year, AfterTime release their first music video for “Masquerade.” Clearly a favorite track, and for good reason (it’s appeared on both their EPs), “Masquerade” is a suitably epic and immediately catchy track, particularly with its soaring chorus. As for the video, it’s quite fitting to the song itself – switching between cuts of the band playing within a gothic-y mansion and vocalist Sarah Wolf wandering through other parts of the building, along with a masked man (who eventually meet up in the end). A well-made independent video that should hopefully thrust them a bit more of a fanbase as they prep for a full-length debut. – Kyle McGinn (AfterTime on Facebook)

Corrosion of Conformity
“Wolf Named Crow”
No Cross No Crown
Nuclear Blast
Back with Pepper Keenan on vocals, Corrosion of Conformity embrace that southern sludge/doom metal swirl for their latest album No Cross No Crown. Beyond the bluesy riffing and jam-like rhythm section parts, “Wolf Name Crow” works on the video front because of the animation-oriented visual aspect that gives off this older 70’s/psychedelic atmosphere. Symbolism abounds, taking the images of the people, skull-adorned gunmen, and of course the ‘crow’ themes to almost Pink Floyd-ish / The Wall levels. Corrosion of Conformity prove through this video that you can be creative without including stock band performance footage to get your ideas across with imagination and effectiveness. – Matt Coe (Corrosion of Conformity on Facebook)

Deathwhite
“Dreaming the Inverse”
For a Black Tomorrow
Season of Mist
Gloomy stalwarts Deathwhite were picked up by Season of Mist before their first full-length, For a Black Tomorrow hit the streets early last year, so this video acts as the proper label-backed intro to the act (the album is set to release in February). “Dreaming the Inverse” as a track is the culmination of what we’ve heard from Deathwhite so far, with Katatonia-esque depressive riffing complimented by some soaring and emotive vocals wrapped in an addictive package. The video shines just as brightly (darkly?), focusing on a man falling slowly into madness (love the subtle hooded figure the pinned letters form at the end) following some similar scorn from a former lover. A gritty and all-too-real look at situations like this that nail the song’s theme perfectly. – Kyle McGinn (Deathwhite on Facebook)

Galactic Empire
“Duel of the Fates”
Galactic Empire
Rise Records
With the release of a new Star Wars film, timing was certainly ripe for a new Galactic Empire video. Tackling one of the more ‘epic’ tracks of the franchise and metal-izing it, it’s amusingly paralleled by some rather humorous and un-serious moments. The interactions between Kylo Ren and Vader are hysterical, as is the reveal at the end that Ren battled the Jedi for backstage passes. That being said, there’s also some fantastic choreographic and visual effects to be had as well – with a central lightsaber duel that feels on par with what you’d expect from the big screen. Bottom line, Star Wars fans are going to love the video and get a few chuckles out of it as well. – Kyle McGinn (Galactic Empire on Facebook)

Iced Earth
“Black Flag”
Incorruptible
Century Media
Lending itself well to a video representation based on the pirate-theme lyrics, “Black Flag” encompasses the band’s penchant for mid-tempo anthems, opening on a slower, reflective basis before ramping up the twin guitar/cultural harmony proceedings. Stu’s impressive diversity in his vocals match the shape shifting musical maneuvers, while the narrative battles on the pirate ship work well against the band performance footage. The band members also take part in much of the acting – many will enjoy the special effects / movie nature to this video. In a previous era, this would be priority playlist material for Headbangers Ball – fortunately in the YouTube generation, the world can take this in at their own leisure whenever they want, and should consistently. – Matt Coe (Iced Earth on Facebook)

Master Sword
“Let Me Show You the Night”
Shadow and Steel
Self-Released
Legend of Zelda-themed traditional metal act Master Sword hit hard with their latest music video – one that feels more akin to a short movie than anything else. The Twilight Princess inspired track is one of the more energetic on the album and it’s lovingly captured in video form here. Vocalist Lily Hoy plays a second role as a Twili in the piece (presumably Midna) and some of the visual effects are sure to please those who have played the original game. It’s an intriguing story, and quite well done (especially considering the band is an independent one with a rather low budget). More proof that just because it’s not label-backed, it doesn’t mean it can’t sit right beside those that are in terms of quality. – Kyle McGinn (Master Sword on Facebook)

Orphaned Land
“Like Orpheus”
Unsung Prophets & Dead Messiahs
Century Media
Offering up a taste of what’s to come on their latest release (due later this month), Orphaned Land have a strong song on their hands with “Like Orpheus” – particularly with the guest vocals of Hansi Kürsch, which sound near magical given the surroundings of the instrumentation. But the video deserves a bit of its own merit for what the band is trying to accomplish. It centers on a Middle Eastern man and woman, contrasting their daily lives and customs, and how they are brought together through heavy metal (a Kreator concert). An endearing concept, and having them next to each other (unaware of their similarities within) is a striking piece. A killer track with an equally killer (and timely) message. – Kyle McGinn (Orphaned Land on Facebook)

Persona
“Epilogue: The Final Deliverance”
Metamorphosis
Self-Released
Persona’s Metamophosis showed the band more than capable of taking the next steps in the development of their sound, and “Epilogue” is a more melodic cut (with a vibe more similar to their debut) with a catchy main riff and chorus that closes out the album. In regards to the next step, 2017 saw the band leave Tunisia for their first European tour. The video for “Epilogue” serves as documentation for said event. More of a fun video than a conceptual one, it takes into some behind the scenes material (everything from driving, interviews, fan meetings, and the band enjoying themselves on the road) as well as some performance shots from the shows. Nonetheless an enjoyable video that gives fans a better glimpse of the band outside their music. – Kyle McGinn (Persona on Facebook)

Visions of Atlantis
“Return to Lemuria”
The Deep & The Dark
Napalm Records
Given the uptick in lyric videos, it’s also nice to showcase some that go above and beyond in their execution. The video for “Return to Lemuria” prominently features vocalists Clémentine Delauney and Siegfried Samer singing their lines while the lyrics are cast out with plenty of seafaring visuals as accompaniment. Compared to many lyric videos, there’s a lot to take in and really helps in promoting some added views. Delauney and Samer sound fantastic together in this track, and the uptempo energy makes it one that’s easy to listen to repeatedly, making The Deep & The Dark one to look out for when it releases in February. – Kyle McGinn (Visions of Atlantis on Facebook)