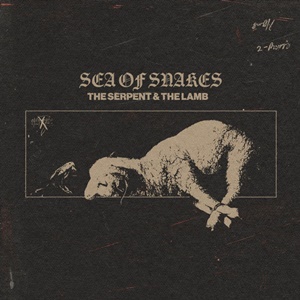 Already aware of this California stoner/alternative metal act through last year’s fine World on Fire EP release through Metal Assault Records, anticipation is on high for Sea of Snakes in the follow-up full-length The Serpent & the Lamb. Crossing over genres from stoner to southern rock, doom to alternative with that heavy-handed angst, listeners can expect ten tracks of compact, groove-oriented material that has hypnotic, earth-shattering capabilities. From the sultry guitar opening chord progressions of “Start a War” on to the pounding, doomy conclusion for “The Ritual”, this is another testament to a quartet of musicians hellbent on cultivating a lower register, crunchy good time atmosphere.

Guitarist Jim McCloskey has this thick tone to his phrasing that melts paint instantly from walls, circulating around influences from Black Sabbath and Kyuss to Corrosion of Conformity, Alice in Chains, and Clutch be it in lurching, measured mode during “End of the Sun” or semi-jumpy in southern fried groove angles for the second half treasure “Third Kind”. The rhythm section delivers monumental support for the heavy music on display – knowing exactly when to go from up-tempo action to half-time doom strains right away for opener “Start a War”, volleying in 70’s Sabbath-esque atmosphere as well in the alternative-fueled “God of Creation”. In certain sequences you can feel this smokey vibe where wah-wah angles mirror the bluesy, emotional melodies from singer Jason Busiek, who rivals classic singers like Layne Staley and Ozzy Osbourne as “Dead Man’s Song” optimizes all the tools in his collective voice. Although there have been lineup changes between releases, the doom and gloom meet groove/southern/alternative accents in a heavy context has not been sacrificed – only intensified to outer limits this go around.

Sea of Snakes embrace a style that may have throwback charm yet develop this propulsive nature to their songwriting and performances which can keep listeners engaged, heads banging, fists pounding in unison while the music is cranked. The Serpent & The Lamb is an ideal follow-up, hopefully ensuring a long career in the making because this is quality output that won’t be forgotten anytime soon. 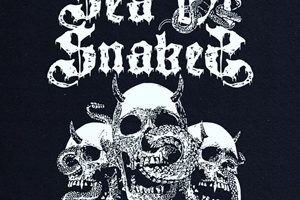