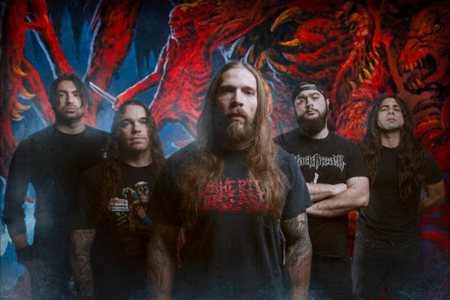 Dead Rhetoric: I’m a pretty big fan of your first novel, The Armageddon Chord. Do you have any plans to write another full-length novel at any point?

Wagner: Thank you. I’m actually way ahead on the writing. Let’s talk about The Armageddon Chord real quick. That book came out in 2011, and at the time, I had wanted to focus only on writing and being a full-time novelist. That same year, Broken Hope started discussing reforming and coming back again. A real opportunity for Broken Hope to come back was happening, and I wanted it to. Frankly, Broken Hope is a big part of my heart, my DNA. I never really wanted Broken Hope to go on hiatus but it had to, just between personnel changes that were so major. It really put the brakes on the band and I didn’t really want to do the band if it wasn’t going to be a killing machine with members who were really dedicated and wanting to do it full-time. At the end of the classic Broken Hope line-up – when Grotesque Blessings was coming out…when everyone in that classic line-up started going their separate ways, I was the last man standing and it just didn’t feel right. So I said I wasn’t going to do it until it was right – when I got the right guys.

I didn’t expect it to take 10 years, but that’s okay. Things happen for the right reasons…anyways, back to my writing. I didn’t really plan to do Broken Hope. And Broken Hope came back into my life, and it came back in such a big way that I wasn’t able to write full-time. But I will say that it doesn’t mean I’ve been sitting on my ass. I work it out so I try to write full-time – all my fiction stuff. Since 2011, I’ve done the following: I’ve published numerous short stories in different short story collections, I wrote an essay on writing horror that got published in a ‘how to write’ series of different genres that a major publisher put out, I wrote a prologue/intro to a Rob Zombie biography that Joel McIver put out, and I did some other writing things.

But above all that, I’ve got two brand new novels written. They need to be edited, but I’m working on that. I have a current work in progress, which would basically be a third new novel that I’m really trying to get the first draft of completed over the summer. From there, I really want to work on seeing all three of these new books published in the next year or so. When that happens, because I’m really hard on myself sometimes…like why am I not producing more or getting it done quicker. But Rome wasn’t built in a day, and I’ve got Broken Hope in one hand and writing in the other. My two biggest passions – I just have to manage time. I’ve got a family too and everything. The bottom line, when these come out I’ll feel really good because I’ll feel like I made up for lost time since 2011 with the full-length novels. As long as I keep writing, I’d like to still keep putting out new books, like every year if I can.

Dead Rhetoric: Are the novels connected at all, or are they separate stories?

Wagner: Totally separate. Everything is stand alone. I can tell you this – The Armageddon Chord was more of a thriller than a straight-up horror novel. It was like Raiders of the Lost Ark with a heavy metal soundtrack. The protagonist is a god of guitar-playing – there’s some elements of horror but it’s really more of a thriller. Probably right now, with my current material, I’d say it’s the most mainstream thing that I’ve published, besides some short stories. The new novels that I have are really the Jeremy Wagner brand of horror. Not as extreme as some of the lyrics that I write, but definitely disturbing and much darker. It goes without saying, anyone that knows about my writing, that I have a real passion and love of horror. But dark fiction is what I’m really passionate about.

These new novels are pretty fucking dark and disturbing. That’s what I’m really comfy with. I think that’s why I can continue to be prolific – it’s like anything you are passionate about…whether you build bird houses, plant gardens, write books or music…I’m just doing what I enjoy. I’m not doing it for success. I’m really passionate about the craft of writing fiction and being a novelist. I write what I want to write, just like I write music and lyrics for Broken Hope that I want to write. It’s awesome. It’s a great feeling.

Dead Rhetoric: You mentioned the lyrics – this might be a tough one, but do you have any favorite lyrics that you have done over the years for Broken Hope?

Wagner: I’m going to try to break it down by album and give you an overview. With Swamped in Gore, the song “Gorehog” is my favorite song to play, but I love the lyrics to it. On Bowels of Repugnance, I really like “The Dead Half” and “She Came out in Chunks.” When you look towards Repulsive Conception, our third album, there’s actually a lot of tunes on that album…”Into the Necrosphere” – I liked the story behind it. “Engorged with Impiety” – I like that one a lot too. Then “For Only the Sick” – I like the lyrics to that because it’s a tribute to all the death metal fans and the death metal genre. I definitely want to note that. That was a little bit different…the dark stuff we were talking about, this was more of a tribute to the scene.

On Loathing, I’m really fond of “Siamese Screams,” “I am God,” “He Was Raped,” and “The Cloning.” Then on Grotesque Blessings, I’d say “Wolf Among Sheep,” “Chemically Castrated” – those are some of my favorites. On Omen of Disease, the title track itself is one of my favorites, with “Womb of Horrors.” For the new album, I probably sound biased and that I’m trying to promote the album but I really think that all my new lyrics are my best work yet…at least Broken Hope lyrics. I worked really hard on them. Damian [Leski], he made me go back to the drawing board and rearrange some stuff and I really think I worked really hard and made the best lyrics I could.

There’s some stuff on there that’s touching on different territory. You’ve got “The Meek Shall Inherit Shit,” which I’m not a political guy but it really speaks about the environment and the state of the planet and what we are doing to it, which is fouling the nest that we live in and not leaving much of a planet – we aren’t leaving a lot for future generations and it’s only going to get worse. “The Bunker” which is very historically related to Adolf Hitler and Eva Braun being in the bunker in Berlin that they killed themselves in. “Mutilated and Assimilated,” switching gears, is a tribute to John Carpenter’s The Thing. There’s a lot of other stuff that’s based on real-life, things that have actually happened. “Outback Incest Clan,” “The Necropants,” “Russian Sleep Experiment” – those are all things that actually existed in one form or another that I’ve read about and researched. A lot of the rest of the material is my own twisted imagination.

I feel like I’m still putting out fresh lyrical ideas. Just like with the novel, I try to tell a complete story with my lyrics. It’s like micro-fiction or flash-fiction. I’m working within the framework of a few minute of music. I have to go quick and get straight to the point. At the same time, I’d like to tell a story rather than just have offensive and shocking content blurted out – to hook a lyric reader. I’ll let the music do the talking, and I’ll let the lyrics tell a story. That’s how I like to put it.

Dead Rhetoric: Going along with what you were just saying, do you feel that lyrics in death metal get kind of put under the table? That they are underappreciated because there is so much of the “let’s just toss this out here for shock value and not put much thought into it because the lyrics are just going to get barked out anyway.”

Wagner: Yeah – I’d be lying if I said…especially when I was younger, the song titles alone I definitely wanted…and I still want song titles that stick out and are memorable. Just the title, they capture a fan/listener’s attention enough to where they might go, “Hey, I want to go read what these lyrics are about…the title sounds interesting.” I think some of it can be underappreciated. There’s a million death metal bands, so many different labels – small and large, putting out death metal, and I see lots of song titles and lots of album covers. It’s a lot for the death metal fan who is just eating up all this stuff. I don’t know if they pay attention to all the lyrics. The titles alone on a lot of this stuff is mind-blowing.

I think that if you are a lyricist like me, and you are trying to put out great material, just don’t expect it to get accolades [laughs]. They are death metal lyrics, and a lot of times lyrics get overlooked. There are people that tell me that they appreciate the lyrics – I do get that from fans here and there, not all the time but I do get appreciation. Of course, that makes me feel fucking great.

But another cool thing is now in this day and age – we have a video timeline, where we release all these different videos. Some are official music videos, some are 360 degree videos, and then some are lyric videos. Lyric videos are really cool because someone who wants to hear a new Broken Hope song can only hear it as an advance track as a lyric video. They play the video, and visually they are watching it unfold but the lyrics are on the screen as the video images are playing. And of course, the exclusive track. So they are taking everything in at once – the lyrics and the music. I think that turns people on to the story I’m trying to tell. I think lyric videos have helped me get the story across.