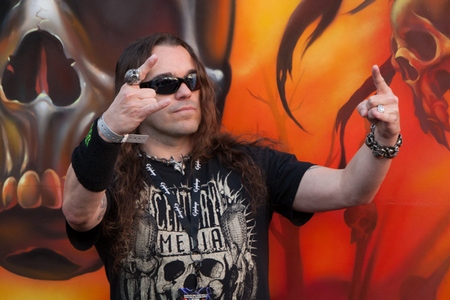 Dead Rhetoric: Personally speaking, when I found Repulsive Conception back towards the late ‘90s it definitely opened my eyes in seeing that the lyrics [in death metal] can have a bit more meaning and thought to them. So kudos to you on that.

Wagner: Well thank you, and on that note I’m going to tell you a bit of inside info. The lyrics on Repulsive Conception…every song is really lengthy, lyrically. Since Repulsive Conception, I haven’t really written lyrics of that length or detail. Part of that is, I totally remember writing the lyrics to Repulsive Conception, and what I’ve always done – whether it was Joe Ptacek, our original singer, or Damian Leski, is that I’d write the lyrics and then give the singer a stack of lyrics. I don’t tell them where to put anything. I leave that ball in their court. They can take whatever song that I’ve written lyrically and place it to whatever song musically, at their discretion. Then they can re-arrange it, cut lines out, or whatever.

With Repulsive Conception, I’ll never forget – I gave Joe Ptacek a stack of lyrics for the whole album and within a week or so he came back and said, “Hey man, these lyrics – none of them are long enough. I want you to double them.” I was like, “Are you fucking crazy dude? Are you going to sing over everything?” He said he wanted to fit words in everywhere he could. So I said okay. Fuck, it was like having an editor at a publishing house, Joe kept sending me back to add more content. All those songs became really lengthy, lyrical micro-horror stories. That’s why they are very unique on that album as far as their length and their detail. That came back to bite Joe in the ass later because it takes a lot to be a real guttural death metal frontman. If you look at the regular, classic guys like Chris Barnes or George Fisher…you have guys that are fucking super guttural, they are headbanging in a live situation and you have to belt out those words in such a way, like no other form of music.

So when we started playing live and touring on Repulsive Conception, it became a challenge for Joe to deliver those lyrics, vocally live. He really wanted to fit them into the music, and you know what, bless him – he made it work on the album and he made it work live. But it was a challenge – he challenged me and put me back to the drawing board and I delivered for him and then he found out that it was a lot of words [laughs] to sing on those songs. So that’s a little backstory on that one – thank you for noticing. Every album is a time capsule, for me at least. I remember the whole process of writing lyrics on that one.

Dead Rhetoric: You mentioned The Thing earlier…being such a big fan of The Thing, what took you so long to come up with a song that tackled it?

I don’t know why I didn’t earlier, it’s sort of like the right time and right place to write about it and do it justice. I did honestly write about The Thing in lyrical form right around the time of Grotesque Blessings – right after that. I was writing music and lyrics…some of the music post-Grotesque Blessings ended up on Omen of Disease. Some lyrics here and there did as well. The Thing, the lyrical content was never fleshed out enough and I just put it on the backburner.

I watch The Thing movie every couple of months at least…I guess it was just the right time. I felt really inspired about the movie and revisiting the lyrics I wrote. With any lyrics I’m really into, I dive in head-first and keep going until I have them done, at least to my satisfaction. That’s basically how the lyrics to “Mutilated and Assimilated” came out – I just finally took hold of that idea and that concept. And I wanted to do it right – I really wanted to convey the horror and the storyline of The Thing. I wanted to do something that would pay tribute – I pay tribute a lot, it seems like in various forms, to John Carpenter.

In this instance, I wanted to pay tribute to him for his creation – this movie is so amazing on so many levels. From the story to the horror to the paranoia that runs throughout the film, to the practical effects of Rob Bottin that are, to this day, untouchable. The score of the movie – the whole thing is just terrifying and so original. So writing lyrics to salute that movie, I wanted to do it the right way and I think I did. Sometimes when you want to do things the right way, it takes time and you just have to do it when the moment is right for you.

Dead Rhetoric: One thing I’ve noticed since the band has come back, with social media, is that you are very appreciative of your fans. There are all those Broken Hope fan appreciate posts that you’ve done over the years – how much of an impact do you think that has…getting that extra connection to the fan-base?

Wagner: I know that any fan recognition that I’ve given and experienced back from fans has been wonderful. I guess, to back up, I’m a music fan…I still have my heroes and bands that I love and admire. I know what it means to be a fan of music and what that band I love means to me. My mindset is like this – sometimes I find it fucking weird, it sounds funny, that I make music that people really like around the world. There are some people that definitely hate our music [laughs] and don’t like what I do, but I don’t let that bother me. It’s the people that really love and appreciate our music that blow me away, and I can’t believe people love our music so much in certain parts of the world.

So as a fan, with the fan mindset, when someone sends in a photo of them wearing a Broken Hope t-shirt in some corner of the world, or we do a concert…and it could be in the United States, but someone flew from Australia to see us and they are practically crying because they got to see Broken Hope, that really tugs at my heart. I know that doesn’t sound too fucking brutal, but you know what, it means the world to me because I made some kind of art that someone loves so much. And they are telling me this. I’m going to give them the fucking time of day and do what I can in that moment to make their experience even more special. If I give them a guitar pick or take a picture or whatever, I’m always just grateful that we have fans. I’m grateful for every single one of them. Anyone who has ever met me in person knows that – I will go above and beyond to show a fan how much I appreciate them.

We talked about Broken Hope’s place in the grand scheme of the universe, and we are definitely not a super huge band at all. We are just a little, indie death metal band. But we do have fans, there’s not millions of them, but the ones that are there for Broken Hope – I love them and I appreciate them. I wouldn’t be here with this album if it wasn’t for people wanted more Broken Hope. You have to sell albums [laughs], and for that, I’m just grateful to every Broken Hope fan.

What’s cool is that at this stage of the game, seven studio albums and one live album, a couple concert DVDs, and 29 years since the band’s inception – I still just have a huge passion for death metal and what we do. I’m very grateful we can still put out exciting albums. This new one is our best yet, and with the expanse of time that we’ve been talking about, when it comes to fans…there’s always new fans. The older I get, it’s kind of crazy. I’ve met old fans who bring their kids to Broken Hope shows, and their kids tell me they grew up listening to Broken Hope, which is kind of crazy but I remember growing up listening to my mom’s Beatles albums, so I get it. With each new album, you have an opportunity to turn on younger people, older people, people who never heard you before. To that end, I love being relevant and I love turning anyone I can on to Broken Hope. Anyone that digs the band, I’ll shake your hand anytime.