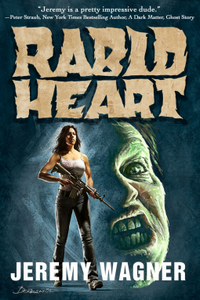 Jeremy Wagner, more known within these pages as the guitarist for death metal act Broken Hope, has also done more than his fair share of horror writing over the years. In addition to a number of short stories (often included in horror anthologies), his first novel, The Armageddon Chord, hit shelves back in 2011. Rabid Heart is his latest novel, and dips its toes more thoroughly into the horror genre, but with some fun and intriguing twists along the way.

Those familiar with The Armageddon Chord know it had an almost Indiana Jones-esque vibe to it, but Rabid Heart goes into something a bit en vogue at the moment with the zombie apocalypse (admittedly, he began work on this story far before the ‘zombie’ trend began). But fear not, Wagner clearly knows and understands the premise of these sort of tales (references to Stephen King with the zombies referred to as ‘Cujos’ and atmosphere/tone similar to Cormac McCarthy’s The Road at times), and does things throughout the novel that aid in keeping his story a fresh one. Focusing on 21 year old Rhonda Driscoll, who lost everything and almost everyone in the zombie apocalypse (sans her Marine Colonel father), the story picks up 6 months after the ‘event’ with her adjusting to the ‘new world.’ After finding her undead fiancé on a mission in her hometown, she smuggles him smuggles him into base and then hits the open road.

The way that the story plays out was often not the way that this scribe would assume it to go, and Wagner keeps it surprisingly human throughout. Characters acknowledge and admit to their mistakes, which helps to add to that vibe. For a story that reaches into the horrific and supernatural, the characters are quite grounded in reality. You understand why they act the way that they do, and the main cast is much more than simple one-dimensional caricatures. As the story progresses, there’s an unexpected sweetness that blossoms alongside the horror elements, but it’s done in a natural way that truly enhances the story. But the horror elements are there – those longing for some violence and disturbing images will find it (a few scenes pop immediately into mind), but never at the expense of the story.

Just like The Armageddon Chord, Rabid Heart features some breakneck pacing. There’s never a dull moment, which makes it a hard story to put down. It’s constantly engaging – there’s enough detail to lure you in and give some vivid scenery to the world of Rabid Heart, but Wagner never forgets to keep the story moving at all times. Short chapters, each with a small, enticing illustration at their onset, are set up in such a way that you just need to read one more. This combination of strong, developed characters and brisk storytelling is easily the novel’s strongest feat.

Rabid Heart is Wagner’s finest work to date. The way that things get turned upside-down and drop unexpected twists in the tale keeps it exciting and near-addictive. The characters propel the action forward, but with a surprising sweetness and courage that was not expected, but certainly cherished. A page-turner that death metal fans as well as avid horror aficionados will be drawn to with glee.