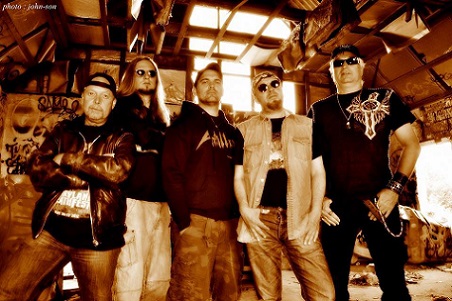 Fashioned as one of the few bands not from Germany to play the Euro thrash card well, Denmark’s Artillery have endured a career of multiple stops and starts, lineup changes, and occasional indifference toward the melodic thrash sound they so proudly uphold. It’s the slippery slope a band treads simply by being different, and if we want to go that route, then the band’s 1989 Terror Squad and more importantly, 1990’s By Inheritance would enter into that category, for both are rife with melodious singing, superfluous leads, and a total lack of jean jacket boneheadnesses that permeates the sub-genre. In essence, Artillery are an odd duck…and proud of it.

The band’s latest album is Legions, a relatively able-bodied melo-thrash joint guided by the soaring vocals of new throat Michael Bastholm Dahl, a man whose emotive, power metal-ready pipes flood the zone on excellent tunes like “God Feather,” “Legions,” and “Enslaved to the Nether.” According to guitarist/founding member Michael Stützer, the band stumbled upon Dahl as he was paying homage to a certain leather-lunged vocal acrobat.

“We found Michael at a local cover band playing Mercyful Fate/King Diamond covers,” begins Dahl. “We knew he could fit in the band both with his voice and with his very down to earth personality! We knew he would create some great hook-lines, so we were very secure about how it would sound.”

Dahl replaced long-time vocalist Søren Adamsen, who left the band right after the release of 2011’s My Blood to focus on other projects. As Stützer relays, the vocalist position in Artillery is one that requires a unique vocal range, one that traverses past the traditional sing-bark found in most thrash bands. “I never thought that we have a real thrash singer in Artillery except from the early demo days,” he says. “I always consider Flemming [Rönsdorf], Søren and now Michael like powerful melodic singers who sounded different like singers from Kreator or Sodom, etc. Of course Michael is the most melodic of them, but he can sing both Flemming and Sørens songs very close to the originals.

“Writing Legions was a very tough period because of our heavy touring,” he continues. “At that point so we really didn´t had time think so much, but because of five dedicated musicians we ended up doing this record in a very positive way and I think its therefore its sounded so fresh and honest.”

Artillery weren’t alone in facing the thrash backlash of the mid-90’s, but rather than trying to swim upstream, the band called it a day 1991. Their subsequent reformation in 1998 and release of 1999’s B.A.C.K. did little to enhance their profile. Truth be told, their native Denmark wasn’t quite ready for a thrash revival, and neither was the rest of the metal world. The band would split again in 2000, only to reform once more in 2007, and hopefully for good.

“Morten [Stützer, bass] and I tried to keep the band going for a long time, but in the 90’s people in Denmark were not really keen on playing our kind of melodic thrash,” admits Stützer. “So it was first in 2007 we really could get things going. Luckily, things are getting better and better now [after] signing with Metal Blade and two new dedicated members to tour with!”

While still on the subject of being a Danish thrash metal group, one could vouch that Hatesphere and Invocator are bands able to succeed in such an environment, but, they are second-wave thrash bands, both born more from death metal than the 80’s. And as Stützer tells it, fitting in and succumbing to labels has never been in the cards for the band to begin with. “I really don’t know, but one of our main goal for playing this music is to have a lot of fun, so we definitely succeeded in that and playing for the most dedicated fans in the world makes it all worth doing. I always thought that being a Danish melodic thrash band was not making things easier for us, but signing with Metal Blade has already open a lot of new doors for us!”

The forthcoming year should see a lot of action on the tour front for Artillery, who should rightfully enjoy a boost thanks to their union with Metal Blade. The guitarist wraps by laying out the next year:

“We will do our own South American tour in February with Onslaught, play some festivals like Metaldays, and we are working on both a European and a US/Canada tour.”