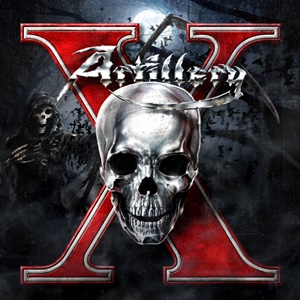 Handling a transition such as the loss of a family member is tough – especially one that you’ve played with in a band since 1983. That’s the case for Artillery guitarist Michael Stützer with his brother Morten who passed away in 2019 – as X not only stands for the group’s tenth album, but first for new second guitarist Kræn Meier who has been a live member since 2017. Fresh blood often inspires veteran artists to revitalize their sound – fortunately for this act, their heads down power/thrash still has relevant potency because of a willingness to adjust focus, maintaining melodic/hook aspects and being exotic/aggressive in many of their musically advanced pursuits.

The commercial edges offer unique mid-tempo dynamics, allowing vocalist Michael Bastholm Dahl opportunity to expand upon his already soaring range through some lower range intensity to channel differing emotions as “Turn Up the Rage” and the hypnotic harmonies within “In Your Mind” prove. The exotic flavors and textures built from Michael’s picking and axe work are staples of the Artillery sound – along with this bulldozer head charge in certain rhythm section foundations that make “Silver Cross” and “Force of Indifference” recognizable as mandatory aggressive bangers. Lyrically tackling everything from an ode to the genre for “In Thrash We Trust” to financial manipulation/mistrust through politicians/social causes on closer “Beggars in Black Suits”, there’s no shortage of topics to match the music the quintet delivers – averaging out to focused four-minute or so arrangements that won’t waste energy or idle during any transition, chorus, or instrumental passage. Even using long-time producer Søren Andersen (with the band since 2009’s When Death Comes) allows the band to stay sharp in these digital studio times while not forsaking that intangible human touch to help them stand out from the hordes spitting out carbon copy records these days.

For Artillery, it’s important to embrace the past while still advancing and being relevant in the here and now. X takes into account the work of say By Inheritance but applies the knowledge and principles that have been present over the last two studio records. Another strong record from one of the European staples in the thrash movement, may they continue forward for as long as they physically (and creatively) are capable.