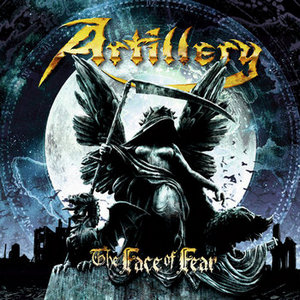 Danish act Artillery deliver melodic power/thrash with finesse and deeper attention to catchy hooks than most bands within their genre. During their 1980’s, they developed a cult-like appeal through quality records like Terror Squad and Fear of Tomorrow. Since their 2007 resurrection, they’ve been mighty productive – The Face of Fear being their ninth studio full-length, and third with current singer Michael Bastholm Dahl, plus gaining worldwide touring opportunities that didn’t exist for the group decades before. It’s obvious that Artillery aren’t out to make sweeping changes to their platform – as these eleven tracks sit in that crunchy, semi-speedy riffing with groove sweet spot sure to promote neck whipping hair windmills and hoarse shout-a-longs from the metal throngs.

The swarm of rhythm guitars set up Michael’s melodic vocal delivery – he’s able to match the racing verse proceedings when necessary on “Sworn Utopia” or the opening title track, but can also convey a smooth mid-range that has a bluesy aspect which gives Artillery that extra added dynamic for differentiation. When the rhythm section chooses to sit into more of a traditional tempo template, you get the sense that some straightforward Metal Church meets early Metallica accents come to the forefront for “Through the Ages of Atrocity” – an arrangement that features some wah wah/ exotic soloing and interplay between the vocals and drumming during key verses. “Pain” showcases the mature elements to Artillery’s sound – the opening clean guitar sequences carrying the ballad-ish atmosphere before the distortion and heaviness kick in, matching the very personal lyrical content regarding alcoholism and drug addiction leading to death. The album ends with two re-recordings of old tracks – including “Mind of No Return” from their We Are the Dead demo of 1982. It helps you understand where the band has come full circle – and gives Michael a chance to showcase his pipes on these classics from the archives.

The Face of Fear keeps Artillery in fine form. Always delivering hefty riffs and sophisticated melodies on both the vocal and musical fronts – it’s prime time to experience their discography if you haven’t done so as of yet.