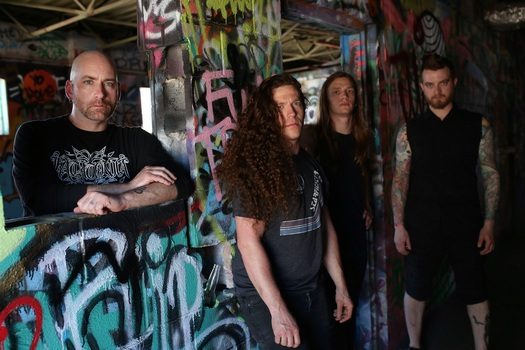 While each new Arsis release tends to take somewhat of its own direction, there’s always been some commonality to the mix. The melodic death laced with complex riffing, the dark and murky vibes – it all lends plenty of credence to the band’s latest effort Visitant. Drawing from some horror inspirations, Visitant sees Arsis getting in touch with all of their strongest aspects, along with a few new twists and turns to enjoy. A sound made even sweeter with the five years in between releases – Arsis is on top of their game. We took a few moments to chat with guitarist/vocalist/main man James Malone to see what his thoughts were on the new release, his relationship with Mark Riddick, and how he’s changed as a person over the course of his time with Arsis.

Dead Rhetoric: One of the things that struck me in the press release was Visitant being a ‘successor to A Diamond for Disease.’ Could you go into that a little bit?

James Malone: In the early days of Arsis, I was super focused and I had a very clear head. I was very driven. I think in the years between life got in the way and I may have picked up some bad habits here and there. I think my creative output was clouded for a number of years. I really felt energized with this record. I was really into writing this type of music again – to me it felt a lot like I used to feel when I was composing the first few records. I think that’s where that statement came from.

Dead Rhetoric: You had a bit of a break between releases, as well as Necromancing the Stone. Did that sort of break in the album cycle routine help to refresh you?

Malone: Absolutely. I think I needed that time and space to do other things. Necromancing the Stone kept me busy for a while, and I teach as well – I teach at the School of Rock here in Fort Worth, Texas. So I’m pretty busy teaching. I think I needed that time to step away from Arsis and touring and get my life together and get my head on straight. I was able to come back into it with some fresh ears and a clearer head.

Dead Rhetoric: Do you feel that becoming a guitar teacher helped you continue to become a better player overall?

Malone: Honestly, I feel like I learn as much from my students in trying to teach them as they probably learn from me [laughs]. It has definitely given me some new perspective on music. I’m forced to teach things a little outside of my wheelhouse. I went to music school and was a composition major, but its been 20 years since I’ve had to learn anyone else’s material that wasn’t my own. Once I had to buckle down and start teaching and analyzing other people’s playing, it definitely gave me some different insight into the instrument, and music in general.

Dead Rhetoric: Visitant is the first time you haven’t been the total, main songwriter. Could you talk about Brandon Ellis’ influence in songwriting with this album?

Malone: That’s not entirely true – I was the main songwriter up until We Are the Nightmare. Then on that record, Ryan Knight contributed 3 songs to that record. Nick Cordle contributed about 3 songs to Starve for the Devil as well. Unwelcome was more of a group effort, so to speak. For this one, I did a lot of composing on my own, as did Brandon. He has 2 songs on the record: “Fathoms” and “Dead is Better,” but he brings a lot to the table as well in terms of lead guitar playing and that kind of stuff. It’s great to have him board. I think our styles help to balance each other out.

Dead Rhetoric: There’s kind of a running joke that people from Arsis get pilfered and brought into other bands. Would you agree with that statement?

Malone: [Laughs] History has shown that to be a trend, for sure. I can’t argue with the facts [laughs]. I hope people don’t take this the wrong way, but if I had been offered a job with The Black Dahlia Murder or Arch Enemy, I would have taken it in a heartbeat and been like, “Sorry dudes!” so I can’t really blame anyone for joining bigger, more successful bands. That’s kind of awesome, so good for them.

Dead Rhetoric: It bodes well for you, since they joined Arsis. So you have to be a good judge of character.

Malone: I guess so [laughs]. That’s sort of the positive spin to put on it. That’s happened quite a few times now.

Dead Rhetoric: That said, the line-up was relatively stable line-up for this album, right?

Malone: Yes, Brandon is still here pulling double duty, touring with The Black Dahlia and playing with us. It all worked out.

Dead Rhetoric: Can you discuss the influence of horror on the songs. I know there are certain aspects to each one.

Malone: Yeah – I know it’s kind of being advertised as a horror concept but for me anyway, while every song is inspired by a horror film or story, I’m not trying to recant these tales in the lyrics. They aren’t inspired in that [conceptual] sense. What would happen when I was getting the lyrics together for this record, when I had a song completed/near completed as far as the music goes, I would put it on and listen to it and see what images came to mind from the music. I would then relate them to a horror film that I was familiar with and use that as the fuel for writing the lyrics. So I’m not telling stories, so much as using the imagery or vibe of it.

Dead Rhetoric: Was that a more deliberate attempt to get away from some of the more personal lyrics that you’ve had with the band over the years?

Malone: It absolutely was. The first Arsis record had some horror lyrics on it, some anti-religious lyrics, and these more personal lyrical themes. After that record, I sort of took that personal, self-loathing, tortured artist bullshit and just ran with it for a number of years. I think it was just easy – just write what you know. With this record, I am in a different headspace than I have been in at any point in my adult life, to be honest with you. I quit drinking a few years ago – life is good. I have nothing to be upset over [laughs]. So I think that probably helped encourage the change in lyrical themes as well. I’m in a different place.

Dead Rhetoric: The band has always gone in at least slightly different directions with each release. What focal points are common with Arsis as a band?

Malone: Arsis to me has always kind of been a take on extreme metal from people that aren’t exclusively extreme metal fans. I feel like we have always brought other influences to the table. But if there’s any characteristics that make it obviously Arsis, I would say the influence of traditional and more ‘80s glam metal type of influences, the complex riffing almost by accident – I would say the mixing of genres.

Dead Rhetoric: Could you speak to your relationship with Mark Riddick for artwork over the years.

Malone: The way that came about was we had signed to Willowtip and the first record was recorded. Jason from Willowtip said he was thinking about having this guy Mark Riddick do the artwork, and it was between him and this other guy. Mark sent over some initial stuff – a new logo was sent over since we didn’t have a very good one at the time. Then he sent over some paintings/illustrations that ended up being the artwork for A Celebration of Guilt. It was awesome, right from the start. Through the years, he and I have cultivated a friendship. I contribute quite a bit to his Fetid Zombie project with guest solos and different instrumentation here and there.

He’s been another member of Arsis in a way. He’s very much been responsible for the aesthetic we have had over the years. For Visitant – Mark Riddick was actually a painting major in college. When I reached out to him about doing the artwork for the record, he asked if I would mind if he tried doing some paintings as opposed to the typical pen and ink stuff. I agreed, and was really happy with how it came out. There’s a more ethereal kind of vibe than the typical Arsis layout.

Dead Rhetoric: How do you feel that you’ve changed as a person with Arsis over the years?

Malone: I was pretty young when I started Arsis. I’m 38 now, and I was like 20 when we recorded the first proper demo that became Arsis but I had recorded a number of demos of songs that ended up being used on A Celebration of Guilt years prior to that, so probably as young as 17 I have riffs that are a part of “Worship Depraved” and whatnot in these super old demos from high school. So I’ve been doing this style for a really long time.

As far as how I’ve changed, I think I was a very super introverted person, and I had a lot to learn about life. It was difficult to do that in a touring metal band [laughs]. Especially within the last few years, I have felt that I have been able to calm down and whatever demons I had were put at ease. I could focus on being a real person. It’s been quite the learning experience, let’s put it that way. I think it’s definitely reflective in the material. It’s very mature and focused these days.

Dead Rhetoric: You’ve got the Bloodletting tour coming up soon. Anything else planned besides the album release?

Malone: We are definitely talking about going to Europe and all that within the album cycle. As of now, the Bloodletting tour is all we have booked. There’s nothing firm but there are talks and things are in the works for sure.