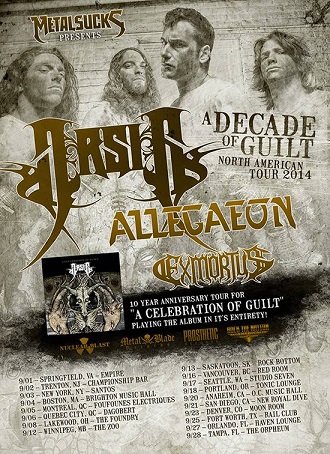 Virginia melodic death metal champs ARSIS have announced a North American tour in support of the tenth anniversary of their A Celebration of Guilt debut. Support will come from ALLEGAEON and EXMORTUS.

“10 years ago I was a full time college student that was given an opportunity. The musical project that I had been working on ‘for fun’ on breaks from school was asked to record a full length album for a small independent record label. I had no idea at the time what the response would be to the album, or if there would be any response at all. Almost as soon as the album was released, much to my surprise, we were getting attention from around the world and my life was forever changed. That album was called A Celebration of Guilt and myself and everyone in Arsis, would like to celebrate it’s 10 year anniversary by playing the album…in it’s entirety…on tour. Many of songs have not been played live in years, if ever. Here’s to a decade of guilt and METAL!!!””