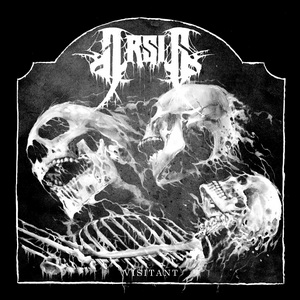 Crazy to think it’s been five years since Unwelcome. Arsis’ last album was ironically a welcome one for this scribe, in seeing the band hit more of a solid balancing between some of their technical explosions and melodic side. With the same line-up as Unwelcome (a seeming rarity for the act), Visitant boasts an even stronger return for the band, and arguably the first time they’ve had an honest-to-goodness rival to A Celebration of Guilt and A Diamond for Disease in terms of sheer quality.

What Visitant does best is to focus on the parts of Arsis that has always been at the forefront of their success. There’s a technical side to the band, but one that doesn’t overshadow the rest of the songwriting. Inside the technical runs, there’s plenty of melodies that lurk out (much like said the already-mentioned early material). Over the years, more of that ‘80s flair has become a part of Arsis’ toolbox, which really came out on Starve for the Devil, and it’s also well-incorporated into the songs here. The amalgamation of melodic death metal with a solid helping of technical songwriting is primed for some catchy grooves and ‘80s arena rock to fill in the gaps for added memorability. Strong galloping numbers like “Hell Sworn” have ‘classic Arsis’ written all over them, with compelling fast riffs switching over to a raise-the-fists type chorus with appropriate melodies and headbanging energy (not to mention the wicked solo). Those darker and evil vibes squeeze their way in too, with slower tracks like “Fathom” and “A Pulse Keeping Time with the Dark” keeping a more sinister feel to them.

While it’s not exactly re-writing the Arsis playbook, Visitant is the band firing on all cylinders. Given some of the ups and downs in their discography over the years, hearing them hit such a masterful high once more is good news indeed. Sure to win over anyone seeking a solid combination of catchy songwriting and technical proficiency in their extreme metal.