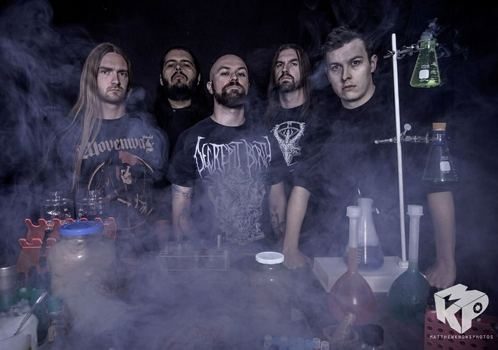 When it comes to the new school of death metal, there are few that can rival Colorado’s Allegaeon. Going back all the way to their Metal Blade debut, Fragments of Form and Function, their brand of melodic, quasi-technically driven material stood out as refreshing and exciting, and set them up as a band to watch. They’ve only gotten better with age, surviving numerous line-up changes and financial difficulties. They are now four releases strong, with 2016’s Proponent for Sentience being the pinnacle of their work to date.

With it being over a year since Proponent hit the streets, the band is now once again in writing mode while they continue to support said album on the touring front. Most recently, that led them across the country opening up for Ne Obliviscaris. Before the band’s gig in New York City, DR caught up with guitarists Greg Burgess and Michael Stancel to talk about how things are progressing towards album five, how Patreon has been going (now that last year’s fiasco has settled down), and the prospects of a live dvd.

Dead Rhetoric: To start, what kind of progress has been made towards album #5?

Burgess: We haven’t done any solos yet.

Stancel: We have about 55-minutes done. After this tour, we are going to put on the finishing touches – figure out what stays and what gets cut.

Burgess: I have to finish a few more classical guitar bits. I was actually just in touch with one of my favorite classical guitar players today, and he is going to do a duet with me on the album. I’m pretty stoked about that. It’s going great so far.

Dead Rhetoric: What are your initial impressions about how it sounds?

Burgess: Just crazy guitar stuff. I’ll definitely say that Mike’s songs are awesome. It’s not that they weren’t awesome before, but Riley will not stop talking about how much better Mike has gotten as a writer. My favorite song on the record is one of Mike’s songs. That has never happened to me before. I don’t know personally how to take it; I might be having a little mental breakdown about it. But It’s really good. It spans the gamut. We have some straight-up prog songs and some death metal stuff. We have some melodic stuff like we normally do. We are trying to do different things with Joe [Farris] this time around. The last two records have started out with big orchestra things. We don’t want to do it again, since we’ve done it. But we are doing a little bit of it.

Stancel: A little bit of electronic stuff too. Nothing super heavy, but underlying things.

Burgess: We are trying to push him [Stancel] to do different things. It’s cool. We are doing different things but it sounds very Allegaeon. Riley is very excited about some of the things he has been writing. He’s using all the weapons at his disposal. Last time it was a slow burn on some of it. We had Speed [Strid] to do some of the cleans, but with “Subdivisions” and “Cognitive Computations,” and now playing “Proponent III” live – the response has all been really good. People know that he has a good voice and isn’t afraid of it. So there will be a little more [singing] but there’s still plenty of death metal. We are pushing the boundaries vocally. It’s going to sound like Allegaeon no matter what. People won’t be taken aback by anything. We aren’t putting out a country record, I can tell you that.

Dead Rhetoric: It’s been over a year into the band’s Patreon at this point. Has it been successful in getting some additional revenue? Do you feel that there’s still an increase in people that are joining?

Burgess: It was great when we first did it, but it left such a bad taste in many people’s mouths. We wanted to let the dust settle. We’ll probably re-tool it, for people that don’t know that we are dumb, and jackasses. Some people didn’t really get it, so we’ll re-tool it so that people know what it really is. At least people won’t get quite as upset.

Dead Rhetoric: Are you planning to do that around the time of the next album then?

Stancel: It’ll just get done in the next three months or so. It’s not even a big thing. We are just doing little things to it.

Burgess: We just want to refocus it and redo the video that got us in so much trouble so that people know what it really is. But it’s still been insanely helpful. It’s helping us to keep band members. We still have to keep jobs obviously, but it helps us to tour and still be able to pay rent, which is the biggest problem that we had before. We would just get the right guys, but when we went on tour they would get laid off and there were no jobs left in the area so they would have to get a crap job. It’s helped a lot, and our show has improved because of it. We have been able to do stuff that would never be able to do before. We are less stressed, but it also gives us a little more to invest in the band. We just moved over to a completely digital show, which we didn’t have before. We don’t have to worry about foot pedals or anything like that. We can just concentrate on playing and interacting with fans.

Dead Rhetoric: I just remembered the last time I saw you guys was when Brandon [Park] wasn’t there at Dingbatz [New Jersey].

Burgess: We don’t talk about that show. That was so bad.

Dead Rhetoric: I felt terrible for you guys. You kept trying but something else would just keep screwing things up.

Burgess: Well, they blew the PA. Our drummer being the backing tracks from when Brandon had to go to his dad’s funeral. It was really funny, because after the Dingbatz show, we played in Richmond. There were fans of [then tourmates] Battlecross that drove up to New Jersey and then went down to Richmond, because they were from there. They saw us at that show, which was a complete disaster [Dingbatz], and then Brandon came back and we were all together as a group, and they were like, “Holy shit! You guys are really good.”

Stancel: Now with our new set-up, if someone fails, we can put them on a backing track. We could have nobody, and just play our backing tracks.

Burgess: I guess we could have a gig and literally not show up. Is that what you are saying?

Dead Rhetoric: I know one of the problems you have had is not getting support tours. Has that kind of turned around at this point?

Burgess: Yeah, we don’t tour unless we get a support tour. It’s gradual, but it’s still hard. We were home for the whole summer. We did the Metal Blade 35th Anniversary tour with Whitechapel, Goatwhore, Cattle Decapitation, and Necromancing the Stone, which was really good. Then we were home for a long time and we couldn’t get anything. I don’t think we were that bothered because we needed a break, but if something came up we would have done it. But we didn’t get any offers.

Stancel: Summer we just had off because of tour proximity to this one. We didn’t do any spring tours because we didn’t want to oversaturate the market. But there are proximity clauses before and after each tour. This one [with Ne Obliviscaris] matched up with the summer.

Dead Rhetoric: Moving into some lighter stuff, how are the band name misspellings going [on tour]?

Burgess: I was very impressed today, it was spelled correctly in the bathroom.

Stancel: It was spelled correctly in the bathroom and outside. It’s been good for the past week. In Canada they spelled it wrong on purpose because they like us, and like to fuck with us.

Burgess: That was great. I love the pronunciation. The catering person today was nervous to come up to talk to me because of the pronunciation. I knew – I saw the nervousness in her eyes. She was like, “Are you in…” and I was like, “Oh, here we go!” The best one I’ve heard on this tour is “A Leggy Blonde.” I really loved that one.

Stancel: That should be our new LLC.

Burgess: We’ll change our ASCAP from Showers with Murphy to A Leggy Blonde.

Dead Rhetoric: I saw you guys were added to the Stranger Things playlist.

Stancel: Yeah, they did a playlist for each of the characters and we were in the playlist for the monster’s character. They had “All Hail Science.” It was all metal – with Aborted and DImmu Borgir.

Dead Rhetoric: I also saw you are doing all three parts to the Proponent trilogy in the set. Is this the first step towards doing a complete, conceptual tour in the future?

Burgess: They are made to be played together. The musical themes just go from movement to movement. It’s pretty awesome. I love playing the sonata live. This might be my favorite tour because of that setlist. It feels really good by the time we are done. We still have some conceptual stuff in the works for album #6, and by the end of this new record, we will have most of the disaster suite done, in order to do a live dvd. I want to do the epics – we’ll do the sonata, “Biomech” I and II, and the whole disaster suite on the one dvd.

Dead Rhetoric: I assume that would be a one-off, probably near home type of thing?

Burgess: I would honestly like to do it as a tour – do a headline tour and do all of it, so by the time we get home, it’s tight as hell for the video. I think that might be a little bit smarter than doing the one off.

Dead Rhetoric: So what are your plans after this tour?

Burgess: We are going to go home and try to finish up [album #5]. We are supposed to be tracking in March. Not really sure what’s going on, but that’s when we wanted to track. We were supposed to go to Europe [laughs], but in standard Allegaeon form, it looks like that may be cancelled, as normal. We have never been and it was something we were looking forward to. We are used to disappointment [laughs]. That was our main thing – Europe and recording. We’ll see. We are going to go finish this record and we’ll see how the dust settles.

Dead Rhetoric: So we are looking for around fall of next year for the album?

Burgess: Yeah, we are trying to get it out somewhere around September/October.