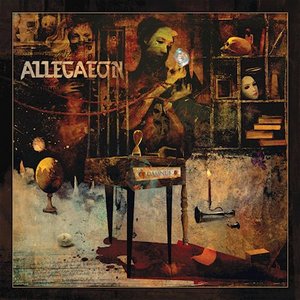 Perpetual champs of technically proficient but entirely catchy and memorable death metal, Allegaeon return with their sixth album in the form of Damnum.  But those thinking that the band would eventually settle down and start to go in a more predictable and formulaic approach will be potentially taken aback by this newest iteration of Allegaeon.  Abandoning the ‘only science’ lyrical approach, as well as letting some more naturally melodic sections permeate the music (both vocally and instrumentally), there’s a certain freshness to be had in this release.  One that also sees the band firing on all cylinders while attempting this forward momentum.

The lyrical change may not strike listeners as a huge deal-breaker or anything (particularly those who don’t seek them out specifically), but the music itself seems to have shifted gears in a way that this more emotive-based lyrical content fits to the point where it’s tough to imagine this album with the band sticking to their guns and keeping it 110% science-y.  While the balance of dark, visceral metal melding with the more melodic is nothing new for the band, the way that it is implemented is worth noting.  “Only Loss” uses some more melancholic feelings to start things out, with come grooves and later clean guitar along with some cleans from Riley McShane before cranking up the heaviness up to blasting territory.  McShane does utilize the most cleans we have heard from Allegaeon to date (and the most we’ve heard from him since Son of Aurelius), and their use in this particular track later on hits a more emotional level as blasts ring around him, and lead into some almost blackened melodies spiraling around at the same time.  But it’s not just his vocals providing the rich melodic touches.  “Saturnine” might be one of the strongest cuts the band has ever penned, with epic sprawling melodies that are sure to chill some bones with their energy and playfulness – not to mention the guitar interplay.  It’s one of those songs that you simply cannot stay still while listening to.

That said, the band has done nothing if not continue to augment their heavier side at the same time.  “To Carry My Grief Through Torpor and Silence” works as a jackhammer through much of the track, outside of the always fun flamenco guitarwork worked in later.  Opening cut “Bastards of the Earth” also immediately gives the listener an impression that the band is holding nothing back.  It slides between brutal mid-tempo riffs to dizzying blackened speed like a battering ram, with only one brief moment of respite for the listener.  McShane’s range in the more extreme areas effectively compliments the band’s increased diversity, from low guttural roars to screams to everything in between.  But in all reality, for this scribe, it’s fantastic to hear his sung vocals in the more extreme tones as well as moments of quiet reflection (“Of Beasts and Worms”) as he’s got some of the most emotive ones around.  Him finally giving them their due in Allegaeon really allows the band to completely take flight and move into areas of both greater melody and extremity.

To keep it simple, Damnum is an absolute gem.  It gets better with each and every listen.  It’s a fine example of how a band can really expand upon their established sound in a way that won’t turn off veteran fans while still reaching out an extending hand to folks who may not have come across them just yet.  Allegaeon have always been masters of their craft, but Damnum takes them to a whole new level.  A gorgeous record that isn’t afraid to show its fangs, and one that you can’t help but smile when listening to it.