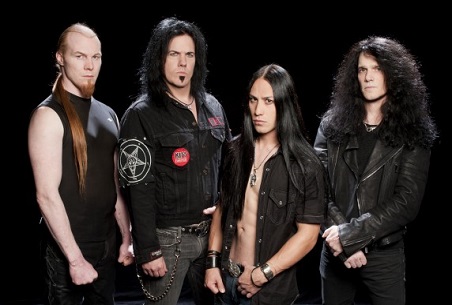 It had been quite a while since Morbid Angel’s last visit to Charlotte, a fact frontman David Vincent would allude to early in their set, but that hardly seemed to matter as a rabid crowd packed the Tremont Music Hall for the performance of the seminal extreme-metal album, and arguably the Morbid Angel album, Covenant in its entirety. Fans of varying generations amassed to witness this auspicious occasion: younger gents in the requisite black-clad metal attire who may not be old enough to remember Morbid Angel before Steve Tucker, and denim-bedecked veterans who likely saw the group tour in support of Altars of Madness. And where so many other endeavors to bridge such generational gaps fall short, the night’s celebration of this landmark release from one of the most recognizable names in underground music would succeed.

To warm up for the main event, attendees were treated to a showcase of three extreme acts hailing from the southeast. First up was Charlotte’s own death metal/grindcore war machine Columns, who because of a late start had to blaze through an approximately 15-minute set of short, sweet, but inexorably brutal cuts. The band was in tight form, and between their supercharged delivery and singer Adam Cody’s maniacal stage presence and ability to go from subterraneously deep growls to Phil Anselmo–style midrange shrieks, the adrenaline started flowing properly. Following up was A Vision Grotesque, a technically proficient outfit whose unique mix of melodic death metal, thrash, and prog kept the crowd from becoming complacent, inciting some headbanging in the front row as well as some moshing and fist-pumping throughout.

The evening took a dramatic tonal shift, though, when VadimVon took the stage and turned the venue into bedlam with its keyboard-backed, atmospheric approach to death metal. While not sacrificing the heaviness of the first two openers, VadimVon injected a cinematic, insidious darkness that had not been felt to this point in the evening, Oddly, the bass guitar was quite loud in the overall mix, much more prominent than this reviewer has ever heard in a live setting. And while that may prove problematic in many cases, the situation worked to the band’s advantage. Bassist Richard Shirah has the chops to carry such sonic weight, and his instrument’s tone complemented the overarching aura of apocalyptic doom.

By the time Morbid Angel took the stage, the Tremont had filled up quite well with enthusiastic metalheads, who erupted into a massive pit almost instantaneously as the first strains of “Rapture” assaulted them from the PA system, and thus began the performance of Covenant. With a seemingly flawless live mix where each blast beat, guitar solo, and bellow was clearly audible, perennial live favorites “Sworn to the Black,” “World of Shit,” and “God of Emptiness” did not disappoint, showcasing why the group isn’t shy to rely on them so frequently, whereas numbers from this album that are seldom visited in the live arena, “Vengeance Is Mine” and “The Lion’s Den” for instance, were given new life, illustrating how 20-year-old songs can evolve into varied yet equally impressive beasts. That is to say that hearing Covenant performed live is quite a different experience from listening to the record: the general tempo of the songs, while not slow by any means, is slightly reduced live, adding a steadier and much more deliberate edge to the songs overall.

The Charlotte crowd had much more in store for it after the final notes of “God of Emptiness” finished ringing, though, as David Vincent announced they would perform one song from each of the other records. Some were the typical representatives of their respective albums, such as “Immortal Rites,” “Where the Slime Live,” and the show’s closer, “Fall from Grace.” Others, however, were completely unexpected, such as the sole deviation from the old-school mentality of the evening, “Existo Vulgoré,” and the left-field renditions of rarer Steve Tucker–era tunes “Ageless, Still I Am” and “Curse the Flesh.” Like the first half of the set, both the old-faithfuls and the more obscure offerings were performed flawlessly. The controlled delivery, the foundation-shaking heaviness, and the raw ability displayed sent fans home happy and highlighted why even now, almost three decades after the band’s formation, Morbid Angel is still a must-see act for extreme-metal diehards.