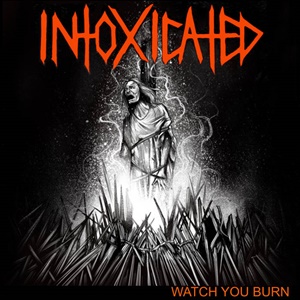 Recording this album Watch You Burn in the same rehearsal studio in Tampa that Morbid Angel called home for years (now reconverted to Candor Recording) – Intoxicated contains members with affiliations across a wide spectrum of the music scene. Lineage with Pain Principle as well as Andrew W.K. assures listeners that these are not young musicians cutting their teeth on thrash metal for the first time – this latest album coming twenty-five years after their self-released album Metal Neck in 1997. You can expect an old school pummeling through ten tracks of punchy riffs, possessed vocals, and this underlying sense of crushing heaviness done the Florida way – wasting no time getting down to business as it straddles the early 90’s death meets solid thrash collision that took over the underground.

The menacing presence of semi-growls and forceful screaming measures from guitarist Eric Payne lacerates the air space in “Legacy’s Demise” and “Dumpster Dive”, much in the way that early Tom Araya and Chuck Schuldiner maintained interest for their unique qualities in the 1980’s/90’s. Occasional use of tremolo-infused runs and blast measures gives “Assholian Mode” a bit of a blackened, Scandinavian-like intensity against the normal thrash riffs and transitions, while the band can also shift gears into a more doom-oriented effort for “Revelation Denied”, the mid-section producing an older Sabbath-esque atmosphere while the faster transition galvanizes listeners into fist raising activities. The influences Intoxicated delivers come from a mix of American and European bands, past and present – the four-piece intent on being very in your face with their content, pushing the pedal to the floor and obliterating all who dare oppose their quest for metal immortality. Frantic leads, natural tones as best as possible (a primitive snare tone thankful to the ears of this scribe), and a quick get in / get out arrangement mentality allows this 33-minute record adequate entertainment while probably guaranteeing less shuffling/ejection concerns.

Watch You Burn is the type of record that old school thrash/death mavens treasure – the right semblance of aggressive/underground nuances while not sacrificing the original spirit of the movement. Intoxicated may have taken forever to release their sophomore platter, but it should appease those who dig the original raw passion of this style.