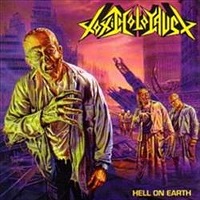 The second Toxic Holocaust album to be reissued, Hell On Earth hit right before the retro thrash movement kicked into high gear. As such, the band got tossed with every other thrash jockey wearing a pair of high tops and Suicidal Tendencies hat. For main dude Joel Grind, this marked an upswing in the band’s popularity, thus, allowing Grind and a batch of fill-ins to start hitting the road and laying the groundwork for their real breakthrough, 2008’s An Overdose of Death.

Practically interchangeable with their 2003 debut, Evil Never Dies, Hell On Earthtakes the same hard-charging, no-frills approach. It works in spades, though, as Grind’s ferocious rasp leads the way on anthemic numbers like “Send Them To Death,” the short “Time To Die” and manic “Thrashing Death,” a song that is probably the best TH jam to date. And yeah, Grind needs to find more word combinations for the word “death”…he’s running out.

Since the retro thrash movement has peaked, the coming years will prove which bands can hang. Our money is on Toxic Holocaust and Merciless Death, who are light-years ahead of their competition in terms of actual good songs. They all sound practically the same, look the same, act the same, so if this isn’t 1989 all over again, then call us stupid. Toxic Holocaust are here to stay, so allow them to thrash on longer.