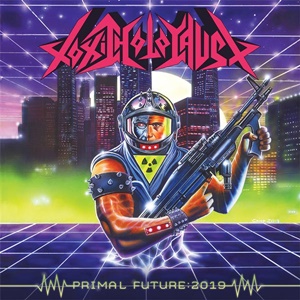 Joel Grind has built Toxic Holocaust from a one-man band in the studio to a touring entity with live musicians, traveling worldwide whenever and wherever they can. Collecting quite the discography between singles, EP’s, splits and full-length outings, elevating themselves to Relapse Records for their third album in 2008 An Overdose on Death… gave them a different level of exposure and credibility beyond the underground who embraced them since their first demo Radiation Sickness in 1999. Primal Future: 2019 as the sixth Toxic Holocaust album sees another shift with eOne, but the musical/vocal attack still remains on a speed/thrash mixture of riffs and tempos, sharpening those edges with a bit of blackened/traditional twists sure to keep up listener engagement.

The traditional / NWOBHM affinity comes right away from the thunderous early riffs and heads down punishing rhythm section work for “Chemical Warlords” – possibly paying homage to Judas Priest circa “Freewheel Burning” although Joel’s spitfire vocal delivery keeps things in that Sodom/Venom pocket. The man knows how to churn out the right speed/crossover thrash hooks and lightning quick transitions that cause multiple bang-overs at parties or live shows across the globe. Evidence to support the claims? Look no further than the flange-fueled “Time’s Edge” or mid-tempo cruise-worthy “Controlled by Fear” and deny yourself the ability to rage uncontrollably, providing air instrumentation simulation as you scream along with the lyrics at the top of your lungs. Intertwining normal three to five-minute arrangements with the occasional punk-infused shortened burst (“Deafened by the Roar” getting in and out in a scant 91 seconds), no second goes wasted at ten tracks and just over 39 minutes. Atmospheric tinges set the title track on an outer universe trip, the tribal textures evident as you feel ‘the sky turning black’ – while “Cybernetic War” ends the record on another catchy, traditional-driven note, the galloping main riff and hero-oriented lead break evoking that youthful spirit of Accept, Saxon, and Iron Maiden.