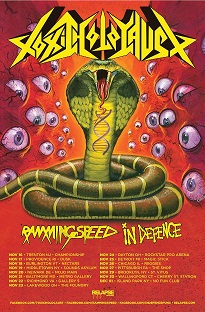 Portland thrash/punkers TOXIC HOLOCAUST have posted the trailer for their upcoming North American tour, which is set to kick-off November 16th in Trenton, NJ. The 15-date expedition will find the band spreading their contagion through much of the Northeast, coming to a close December 1st in Island Park, NY. The band will be joined by RAMMING SPEED and IN DEFENCE.