Careful with this one…The Hell might be the U.K.’s answer to Emmure, which for the love of all that is holy, is something no one should want. The band has already has positioned themselves as a snotty, uber-modern entity by way of their accompanying promotional clips, so consider their Groovehammer debut to be ripe for a marginalized, but surprisingly strong crowd who enjoys their metal as being confrontational, without much agility, and totally un-PC. The Hell are all of those things, and probably a little more, even if a song title like “Bangers and Mosh” is gold.

According to the band’s Facebook page, three vocalists make up The Hell (Nails, Black Mist, and Nice Guy), which gives the band a Mushroomhead-like approach in the vocal department. One of these gents definitely has a toothless, fired-up British delivery that is suitably pissed, as found on the title track, and “Everybody Dies.” Yet per regular fare with bands of such a hyper-pissed variety, there’s only so much spite to go around before matters start to wear thin, so tread carefully once the album’s later tracks (i.e. “We Handle Shit” and Snakes”) come around. They’re not as impactful as some of their preceding numbers.

Very lax in the musical department, the proliferation of chugs and downtuned guitars trotted out at a high frequency are The Hell’s chosen operating method. It’s part-and-parcel with American deathcore, and the streamlined thrust of their fellow countrymen Bring Me the Horizon, a band whose musical short-sightedness has somehow worked to their advantage. Nevertheless, Groovehammer can only settle in with the modern crowd, who always take cues from band’s who are more akin to having one’s head beaten in with a baseball bat than anything else. Meet the British Emmure, albeit not as annoying. 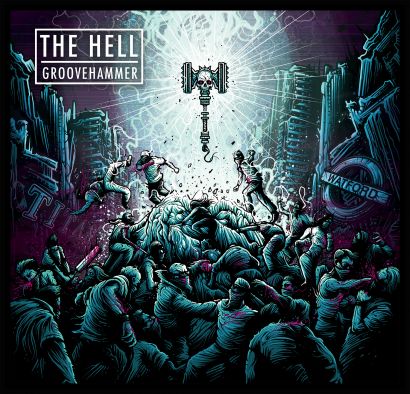