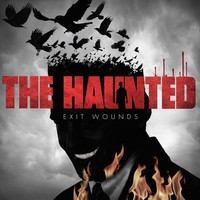 It’s never been easy to be The Haunted. After exploding onto the scene with their now classic self-titled debut, they lost original vocalist Peter Dolving. Enter Marco Aro, who took over for the following two punishing albums, The Haunted Made Me Do It and One Kill Wonder. But upon Aro’s departure and Dolving’s return, things became a bit spotty. The band experimented with some different sounds over the years, to some success (rEVOLVEr) and some controversy (Unseen), and the band itself almost ended up “D.O.A.” back in 2012 with the departures of three members (Dolving, Anders Bjorler, Per Jensen). But the band has risen from the ashes, re-united with Marco Aro and Adrian Erlandsson and joined by Ola Englund (Feared), to release what might just be the best album from The Haunted since their self-titled debut.

Exit Wounds is the most aggressive album from The Haunted in many years. Tracks like “Temptation,” “Psychonaut,” “Infiltrator,” and “My Enemy” show the band still capable of eviscerating listeners with their razor sharp version of thrash. The Haunted has always been able to write those thrash riffs that make you want to take the nearest object and throw it through a window (see “Choke Hold” and “Hate Song”) and we have been given some new classics in the form of “Cutting Teeth,” “My Salvation,” and “This War.” They also bring in a bounty of groove on songs like the Pantera-esque “Time (Will Not Heal),” “All I Have,” and “Kill the Light” to make sure that you’ll get plenty of headbang for your buck.

Two tracks that come across as particularly interesting are “Trend Killer” and “Ghost in the Machine.” Certainly one of the most intense tracks on the album, “Trend Killer” shows Marco Aro as an intimidating force and he owns the track, despite the accompaniment of Testament’s Chuck Billy. With the exception of a short, identifiable The Haunted riff and a sweet solo, it’s a vocally driven track that’s a bit different from the rest of the album but sure to become a live staple for the band. “Ghost in the Machine” closes the album in a very melodic way, harkening back to songs like “Hollow Ground” or “Under the Surface.” The vocal layering and melodic riffing in the chorus is catchy, and nicely balances out the thrashier verses, culminating in a gorgeous solo towards the end of the song.

No one does “pissed off” quite like The Haunted. While they expanded upon their sound over the years, it does the heart well to hear the band doing what they do best once more. Exit Wounds is a sonic explosion of fury and aggression, yet retaining the band’s ear for melody. Hopefully the start of a new era for The Haunted, and one of the finest albums you’ll hear in 2014.