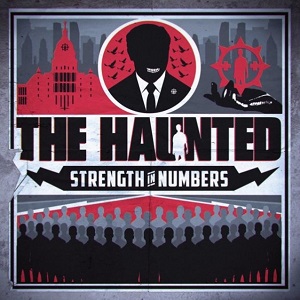 The Haunted haven’t made a *great* album since Made Me Do It, which before you know it, will be celebrating its 17th birthday. While the Marco Aro-fronted version of the band has yet to produce a stinker like Unseen, 2003’s One Kill Wonder and 2014’s sorry-for-the-Dolving-years Exit Wounds played matters a bit too safely, dialing up the band’s patented Swede-thrash blend almost too casually. Strength in Numbers, however, is at long last the first The Haunted album that can match wits with the near-legendary Made Me Do It.

About as punchy and tight of an album as you’ll find this calendar year, Strength in Numbers doesn’t have much dead space flailing around. Rather, the riff combos worked up by the band are predominantly vertical and visceral, whether on searing opener “Brute Force” or lead single “Spark,” which provides a much-needed blast of melody. The opening crunch of “Preachers of Death” is suitably domineering, especially when the song veers into a romping groove. (Lest we forget the world-beating riff capabilities of guitarist Jensen, a man who remains forever unsung.)

The title track, like “Preachers of Death,” unleashes the swift chug, an unyielding bash-and-gash of pure Swedish thrash, while traditional, weighty thrash movers-and-shakers like “Tighten the Noose” and “The Fall” are emblematic of how well The Haunted works within confined, regimented spaces. And don’t sleep on the Slayer-inspired “Means to an End,” a cut that boasts Aro’s best and most cut-throat vocal performance.

Just satisfaction all around here, especially when you ponder where The Haunted were no less than a decade ago. It’s clearer now than ever, that the band is best left in the capable hands of Jensen, Jonas Björler, with Aro out front, barking, while guitar slinger Ola Englund throws out the leads and max drummer Adrian Erlandsson pounds the skins. It’s an intimidating lineup that brings home the goods on Strength in Numbers, which is probably the best thrash album of 2017.