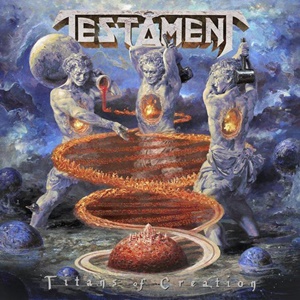 Nothing seems to stop Testament these days. Health issues, changing tides with thrash during the 1990’s, management struggles – these veterans just plug in, plow ahead, and come out stronger in the end. Whether you remember their 80’s uprising (check this scribe here), the subsequent early 90’s ‘commercial’ album The Ritual that was one of their low points for long-time fans, or their late 90’s masterpiece The Gathering that set the stage for a subsequent rebirth for the band that has continued into the current bevy of albums like Dark Roots of Earth and Brotherhood of the Snake – Testament have survived and thrived. Which means they can do whatever they want at this point and most people will check them out – and Titans of Creation has that solid work ethic and acceptance of keeping up with the modern production values and extreme nuances at times, while also being very much a history lesson into the thrash genre and discography on a personal level.

Let’s look at the solid, intricate musicianship and capabilities for this lineup. Drummer Gene Hoglan and bassist Steve DiGiorgio are top shelf at their respective instruments, knowing how to pump up the energy while pick spots for showcasing their progressive/technical prowess. Check into “Dream Deceiver” with those behind the main riff gallops and groove/time signature maneuvers as well as the mysterious, slow burning “City of Angels” to really appreciate what extra spices, charm, and feel they bring to these set of tracks. Guitarist Eric Peterson as a main songwriter just has the right pulse on developing distinctive material that is still 100% thrash but also contains melody, harmony, and even extreme nuances. Right away “Children of the Next Level” bursts out of the gates because of his thick riff roar and triple gallop sections, while later on “False Prophet” just slams in jackhammer precision, combining the feel of say Practice What You Preach next to The Gathering. There’s no touching Alex Skolnick in terms of his lead phrasing and arpeggio-oriented sweeping for this genre- “WWIII” and “Curse of Osiris” two stunners to return to again and again.

As a vocalist and lyricist, Chuck Billy remains one of a kind. These days he knows that he has multiple gears and deliveries to choose from – mixing up the normal clean chilling melodies and semi-growl/screaming patterns in “Night of the Witch”, while being the commanding bellower that helped put Testament on the map during the 1980’s for the catchy anthem “The Healers” that features some sick tremolo-oriented picking that goes into Eric’s blackened influences a bit. More social / political commentary for the lyrical content relating to religious manipulation, future world wars, even mental health stigma and personal health care woes are tackled in an honest way – giving food for thought to the listeners at hand.

Add in more brilliant artwork with the DNA strand and vibrant blue shades to differ from the normal reds/blacks on a metal cover and you know that Titans of Creation means business. Dark Roots of Earth has been my favorite of the latest Testament studio albums since The Gathering, but this effort easily sits on a similar stature to those two efforts, which means most people will be thrilled that Testament is continuing to pump out original, energetic thrash that can stand up well in these tough times. 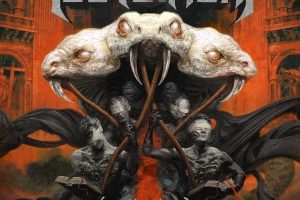