Saxon – Into the Labyrinth (SPV Records) 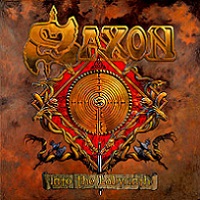 Not even two years removed from the excellent Inner Sanctum, long-running NWOBHM act Saxon return with Into the Labyrinth and it’s business as usual for Biff and the gang. More arena-ready than ever, Saxon’s mid-tempo anthems are just that – anthems. There’s a cinematic quality to the bulk of the songs

here and it makes Into the Labyrinth float a little longer than most veteran metal albums do. How they do it, who knows…

Opener “Battalions of Steel” is a strong number and makes Saxon’s case early via domineering chorus from Byford. Same for the marauding “Demon Sweeney Todd,” which is one of the more up-tempo numbers that band has rolled out of late. “Valley of the Kings” follows suit, as a surging main riff carries the song

through familiar territory which includes a massive chorus.

“Live to Rock” is a blatant nod to AC/DC which is fine and “Slow Lake Blues” corners the blues market for the band. “Crime of Passion” and “Hellcat” are throwaways, but “Voice” is an ominous, early 90’s FM radio joint that shows surprising versatility for a band that has been at it for decades.

While not as strong as Inner Sanctum, Saxon has added another strong album to a catalog that is now nearly double that of some of its contemporaries. Great songs abound; Saxon just doesn’t know when to quit…