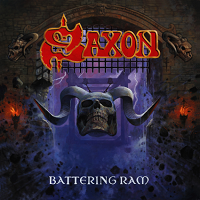 There’s no better example of an age-defying band than Saxon. Every album release, it’s a marvel Biff Byford and company are still operating at such a high level; it’s almost as if they’re oblivious to Father Time, which of course, is utterly key when playing metal. And live, they’re no slouches either, although one is advised to bring some hardcore earplugs. (Saxon nearly destroyed this scribe’s ears in September.) But here come the Brits again with their 21st album, Battering Ram, complete with the usual production team (Andy Sneap) and taut, rigid anthems in tow.

Proper kudos should go to Sneap, whose production expertise is befitting sonically, of Saxon’s riff-dominated, 4/4 approach. At this point, sound alterations aren’t going to happen with the band, so why not beef and modernize everything up? That’s what Sneap has done, which in turn, doesn’t make the band sound dated at all. And because the band’s songs are so simple and basic (read: they’re all formatted nearly identical to one another), the fist-bumping, wavy hair jostle of the opening title track, “Queen of Hearts” and album highlight “Eye of the Storm” are every bit as good as the band’s output from the last decade. (Lest we forget “Stand Your Ground,” which finds Byford at his biting best.)

It’s easy to feel nostalgic about Saxon – they were, after all, at Ground Zero of the NWOBHM explosion that took place in the early 80s. But the band is doing their best to keep things in the present, which explains why Battering Ram holds up so well. Outside of it being somewhat predictable and standard, you know what you’re going get from Saxon, a factoid that has been true (save for a few would-be pop missteps in the mid-80s) since the band was clunking around British clubs in the late-70s.