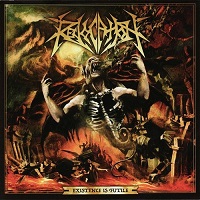 A more realized and healthy proposition over retro thrash, Boston’s Revocation display a virtual riff-o-rama on their Relapse debut, Existence Is Futile. Not only is this 11-song platter technically competent, it comes at you from all corners, including the death/thrash realm, with some melodic angles to boot.

For comparisons sake, this power-trio evokes visions of Coroner, who were really the last thrash band to push the technical envelope without getting in over its head. Acting as Tommy T. Baron (Coroner’s much-lauded six-stringer) is David Davidson, who unleashes a barrage of frenzied riffs on album standout “Reanimanic,” “Deathonomics” and “Anthem of the Betrayed,” which also features some cool gang vocals. Davidson is also brave enough to solo without the benefit of a rhythm guitar track, something we haven’t seen since Pantera’s Dimebag Darrell.

Very much a guitar-dominated album, Existence Is Futile manages to maintain its wings by incorporating various extreme metal ditties. “Leviathan Awaits,” features some rapid-fire blast beats, while “Dismantle the Dictator” and instrumental “Across Forests and Fjords” is a veritable melting pot of the band’s disparate, but unified death/thrash amalgam.

An album like Existence Is Futile and a band like Revocation should benefit from the lack of short-sightedness that often bogs down its competition. There’s no ceiling to this band; the ideas are fresh and challenging, while the musicality (especially Davidson’s) might be the best in the thrash business. An excellent signing by Relapse, Revocation are going to make a severe dent into the thrash game before it’s all said and done.