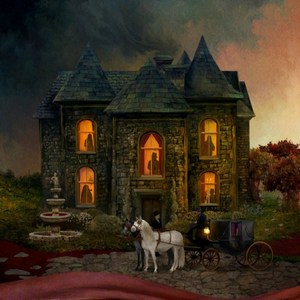 With that out of the way, opus 13 by the soon to be 30-year-old Opeth is a continuation and refinement of the band’s post-Watershed language. It’s longer yet more consistently focused than Sorceress and is far more even keeled in its mixing and sound. There are upbeat passages aplenty but In Cauda Venenum is a morose, reflective experience. Whether part of the band’s progressive metal or progressive rock milieu, the sonic markers of the band remain present here, no matter the ‘heaviness’ with which they are expressed.

Notable early was the news that the album would release in two forms: the original design completely in the band’s native Swedish and a second version in the fanbase-familiar English. My personal preference certainly falls with the Swedish as while the English version is largely identical, it carries an air of being unnecessary. The reason for releasing it is understandable: most of the band’s fanbase is versed in English, even at a rudimentary level. While a very long aside decrying the tendency for the internet to overreact, it nevertheless feels like a missed opportunity to have released the album solely in Swedish. Regardless of your language choice, Mikael’s voice is a dominate force across the album like never before.

So what of the music?

As plugged earlier, it’s both a continuation and a refinement. It’s the Opeth sound expressed through a dark and often weird lens – elements of jazz, folk, and the outright weird seethe and occasionally even howl. “Banemannen/The Garroter” embodies each of these three in equal measure, being a blackened swing through candle-lit spaces. This can be cast in contrast with the uptempo, laden-with-solos “Svekets prins/Dignity”, a song that screams with rock swagger – even when regularly digressing into gentle acoustics. This should not be taken in a derogatory way but this interplay should surprise no one – it’s been the band soul for decades.

On rock swagger: In Cauda Venenumis a showcase for Fredrik Åkesson the guitar wizard. This album has his solos over everything (everything): fiery solos, lightning-like solos, or in the case of mid-album balladesque “Minnets yta/Lovelorn Crime”, almost the entire song serves as a platform for him to solo. Not to discount the song by any means, among the strongest here, featuring piano that flashes of autumnal malevolence and embodies, perhaps more than anything else, the scene that marks the album cover.

And sharing that spotlight: Mikael’s vocals (there are a lot) of them. Likely more than any previous Opeth release. His voice is out front, cast across at times even leading the instrumentals behind him, with layering, harmonies, and even the occasional falsetto journey. And that isn’t to say the instrumentals are lacking for space, for at 67 minutes In Cauda Venenum is the band’s thickest work to date. It’s a long, dense journey. While not doom-like in any way, it is a more reserved, at times even relaxed in its pacing.

There are numerous highlights and many reasons spread between them. The weird prog is paramount on “Charlatan” (title is the same for both releases) and the build to melodic euphoria within “De närmast sörjande/Next of Kin” sets off at the 4:27 mark and will leave the listener agape with joy (…or rage maybe). Unsurprisingly comfortable but pushing comforts in its own way, In Cauda Venenum is not what most would expect for a band on the cusp of three decades.