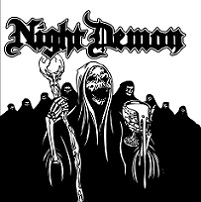 In a way, having a song named after the band in which you play in is the ultimate sign of not caring what anyone thinks. Granted, every freakin’ band says they don’t care what anyone else thinks (not even their own mothers), so there’s not little weight to where we’re going with this little rant. Naturally, throwback metal gang Night Demon has a song and their debut EP named after their chosen moniker, and while their name and presentation is lacking in the creativity department, DR can easily see these guys slapping skins and sharing beers with the NWOBM crowd and not getting laughed at. (Or having bottles of urine flung at them…that’s what they did in those days.)

Comprised of members of The Fucking Wrath, Night Demon plays a rousing blend of flighty Angel Witch-styled metal that hangs with the chorus-happy brood of Diamond Head and even Mercyful Fate, just without the occult aspect. The blend is familiar, but the hooks are there (and in you), especially on the aforementioned title track and “The Chalice” where fist-pumps and nifty, thrifty solos make things happen. Actually, a lot of cool things happen across the four songs on display, thus warranting a full-length excursion from a band who obviously, doesn’t care about very much other than metal, chicks, and beer. What a trio, eh?