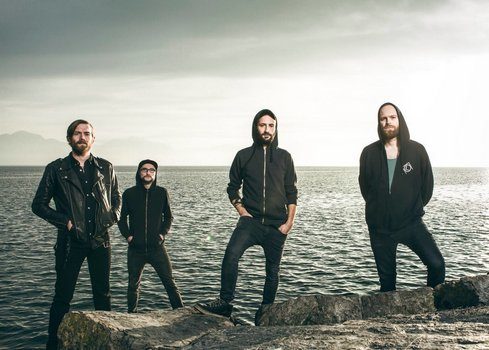 Now running into the latter part of the year, it’s time to start hyping up next year’s releases as well as starting to think about what made 2018 another great year. But there’s plenty of videos to still take in and enjoy, including this month’s round-up, featuring Antimatter, Sarah Longfield, Night Demon, The Ocean, Persona, Resumed, Soilwork, and Veonity.

Antimatter
“The Third Arm”
The Black Market Enlightenment
Self-Released
Nothing like a new release from Mick Moss and Antimatter to get one into a gloomier mood. With The Black Market Enlightenment dabbling into the topic of addiction, you can be sure this release will hit the same marks. The synths create a dark atmosphere, and Moss’ vocals are as touching and emotive as ever. As for the video itself, the album ideas represent themselves well, as the main figure sees an image of himself hanging, and the video itself moves from color to a darkened red as the track progresses. A chilling and stark progression, and one made for multiple viewings. – Kyle McGinn (Antimatter on Facebook)

Sarah Longfield
“Citrine”
Disparity
Season of Mist
A warm, and much lighter video than the above Antimatter, “Citrine” features guitarist Sarah Longfield essentially setting up an air-y tale (complete with saxophone) out in the midst of nature. Lots of tasteful musicianship, and the bright colors really help to make the song standout and shift it into a song that you’d imagine playing in the background on a day such as that. It’s a really dreamy track, and one that should be right up the alley of most instrumental music lovers. Disparity comes out later this month. – Kyle McGinn (Sarah Longfield on Facebook)

Night Demon
“Black Widow”
Darkness Remains
Century Media
Starting off with a sinister radio narrative, this conceptual clip epitomizes the true nature of Night Demon. The “Black Widow” of course stalks her pray and kills at will during the video, but the twist at the end was a nice surprise that most won’t expect. Catchy melodies and harmonies featured throughout as the trio aim to deliver NWOBHM-style anthems to the current metal brigade. One of many songs that jump off the stereo and demand to be heard at peak volumes through stages far and wide. Entertaining in a mini-horror / cinematic way, hopefully sure to satiate the growing legions to the Demon fold. – Matt Coe (Night Demon official website)

The Ocean
“Cambrian II: Eternal Recurrence”
Phanerozoic I: Palaeozoic
Metal Blade
The first track from The Ocean’s Phanerozoic I, “Cambrian II” sets the tone for the heavy and churning album and is a wise choice for the band to represent visually. An 8-minute track, it also brings us back to a fiery looking Earth and turns vocalist Loic Rossetti into a lichen and clay-filled monster. The trippy and dark visuals provide just the right image as the song journey’s through Earth’s past. The lava, fire, and volcanoes are just the right look and feel for the band’s ‘explosive’ and pressure-cooker build-ups within the song (not to mention going along nicely with the science piece). – Kyle McGinn (The Ocean on Facebook)

Persona
“Skeleton Dance”
Single
Self-Released
While we covered Persona last month, “Skeleton Dance” cannot be denied. A fun little surprise just in time for Halloween, the track uses animation and a glorious color scheme to reel in the listener within the first few seconds. A playful track that does the same thing, it’s hard to sit still while it’s playing between the catchy chorus and upbeat metal riffs (not to mention the delightful leads). The video also has a nice sense of humor to it, and really, it’s just an all-around winner. More established bands could learn a thing or two from the execution of this one. – Kyle McGinn (Persona on Facebook)

Resumed
“The Omen”
Year Zero
Mighty Music
“The Omen” is the first video from the upcoming Resumed album Year Zero. An Italian technical, modern death band who do not forget to inject some melody into the proceedings, it’s obvious on the guitar and growl front that Death appears to be a prevalent jumping point for influences. The video intertwines band footage and science-fiction animation of various skulls, statues, and religious figures to make for some visually intoxicating moments. The fretless bass action plus wah wah guitar accents add nice distinct touches – in the end, Resumed picked a cut with proper groove passages beyond the obvious seasoned and advanced musicianship present. – Matt Coe (Resumed on Facebook)

Soilwork
“Full Moon Shoals”
Verkligheten
Nuclear Blast
With Verkligheten hitting the streets early next year, we are already two songs deep into the pre-release with the exceptional “Full Moon Shoals.” A track that takes the melancholic side that latter day Soilwork has done so well, and adding in that little dose of brutal speed and shred as the track continues. But that chorus is a killer, seemingly combining the best of Soilwork and The Night Flight Orchestra into one drool-inducing beast. As for the video, the black and white approach is a perfect fit for the mood, and the minimalist yet intriguing images in the background keep the song from becoming a ‘band playing in the warehouse’ cliche. There’s no worry of disappointment if the rest of the songs sound like this. – Kyle McGinn (Soilwork on Facebook)

Veonity
“Guiding Light”
Legend of the Starborn
Sliptrick Records
The guardians of the four elements are gathering to guide the starborn one… welcome to the Swedish power metal entity Veonity and their latest video for the upcoming album Legend of the Starborn. Featuring soaring vocals, steady double bass, and uplifting riffs that resonate well for fans of Labyrinth and Stratovarius – it’s hard not to sing along to the choir chorus implemented here. The mostly animated/computer graphic style visuals almost make the listener feel like they are involved directly in the action – virtual reality perhaps coming to life before their eyes. Symbolism, lightning, mystery, fantasy, warrior transformations – it’s all in there and more over the course of this track. Probable favorite for many power metal legions. – Matt Coe (Veonity on Facebook)