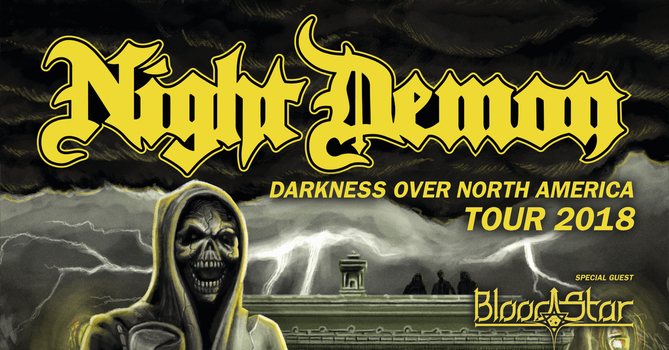 Well documented throughout the site, Night Demon remain workhorses at the ground level to achieve all that they set out to do – bringing the ethics and essence of traditional heavy metal with 70’s/80’s British influences and American power to the masses. Returning to North America for a quick month-long headlining tour in support of not only their latest studio album Darkness Remains, but a double live CD/ triple vinyl offering for Live Darkness – it seemed appropriate for multiple staff members to make an afternoon/evening of the festivities by trekking into one of the best venues for metal in New York City, good old Saint Vitus Bar.

The setup is quite intimate, as if you are taking in bands within a basement yet with proper staging, lighting, and sound equipment. No poles block the sightlines, and the air conditioning plus free water cooler felt refreshing on a humid late summer day. An earlier announcement on the events page for Facebook alerted patrons of the quick hitting fashion of the show (doors 7 pm, first band: 7:15 pm – show over by 11 pm), meaning that if you wanted to get the most bang for your money with four acts on the bill, you better arrive on time.

The first of two locals Beldäm started the evening with an infectious blend of 80’s metal that had plenty of melody in the twin guitar department, plus those strong riffs that could elevate headbanging right out of the gate. The only disappointment would be in the fact that the vocals were buried in the mix – but it was clear the five-piece could play and write killer songs. Imagine a mix of Manilla Road, Christian Mistress, and early Armored Saint/Iron Maiden for references – and given this was the band’s first show together, even the sparse attendees at the time (i.e. less than 20) felt the love and passion of their music right away. Next band Lvger delivered more of a punk/speed aspect to the proceedings – fusing together elements of Motörhead, The Ramones, and Danzig that was raw and steady. The trio certainly oozed attitude – and the very fit drummer must have lost 10 pounds in sweat beyond consistently breaking sticks or having them slip off his hands. Squeezing in an extra song or two at the end, they definitely had their small local flock who dug them – to these ears it just didn’t have enough ‘standout’ qualities against their influences for this scribe to be blown away.

Salt Lake City is home to Visigoth – and thus Blood Star. The connection being guitarist Jamison Palmer who is also a part of Visigoth. This four-piece also contains bassist Noah Hadnutt, drummer Daniel Alexander, and vocalist Madi Smith. The band came out all guns blazing, delivering a blistering set of classic heavy metal with that hard rock edge, very fun and engaging on all fronts for melodies, hooks, and riffs. It’s rare to be blown away on initial airings of original material like “Stiff Liver” and “Stalking the Beast”, plus convincing renditions of 80’s movers like “Stay Hungry” from Twisted Sister and “Wild Child” by W.A.S.P. – but they definitely got the attention of the hundred or so people filling in the venue. Solid mechanics, razor sharp riffing, proper choruses, smart transitions – it’s the type of stuff that made early American metal bands of the 80’s so endearing to the genre. With work soon to commence on a debut EP, this will not be the last we hear of Blood Star.

With a curfew looming, Night Demon hit the stage to the recorded strains of the intro to their opening song off Darkness Remains, “Welcome to the Night” – and did not let go until the concluding crescendo of “Night Demon” an hour later. It’s been three years since last viewing the trio – my first-time witnessing Armand John Anthony in the guitar slot – and the hundreds of shows they’ve played in between continue to tighten their material to a level most bands dream of achieving. All the right hooks, tempo changes, riffs and drum parts that lock in unison for maximum crushing audience approval – beyond the easily identifiable choruses for people to scream back at the band. Splitting the set list between six new numbers (“On Hallowed Ground”, “Black Widow” and the instrumental “Flight of the Manticore” significant winners), resolute classics like “Screams in the Night”, “Full Speed Ahead”, and “The Chalice” (cue Rocky’s stage moment of the night) and the awesome cover of “In Trance” by the Scorpions, you barely had a chance to catch your breath before the next bead of sweat poured out of the musicians as the fog-filled stage set that metal ambiance we all treasure.

Bassist/vocalist Jarvis Leatherby and drummer Dusty Spires are a dynamic rhythm section – the former certainly understanding his role as a spirited frontman championing the primal need of getting those frustrations out in a proper manner through the power of heavy metal. We attend Night Demon concerts for that fix, that release, that need to be refueled for the coming weeks, months, and years ahead – practicing our own sort of cleansing at the altar that we live for. It’s no wonder why they’ve become legitimate headliners in Europe, and hopefully can continually gain that buzz stateside. They have the tools, the songwriting, the commitment, and the integrity to hopefully push their following to that legacy, legendary level. All hail Night Demon!