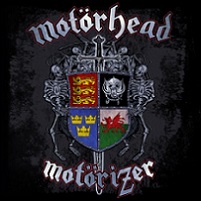 Christ, album #24 for Lemmy and co. Pretty impressive on all fronts, especially in terms of quality, as there really isn’t a dud Motorhead album that everyone dislikes ala Turbo or Load. Their first proper release for SPV, Motorizer is a slab of purely enjoyable hard-rocking tunes that totally support the idea that Motorhead is showing no signs of slowing down with age.

The band’s formula of quick, punchy numbers is once again in top form, as numbers like the fun “Runaround Man,” the biting “When the Eagle Screams” and tongue-in-cheek “Rock Out” (check out the chorus) are classic Motorhead jams. Lemmy (who is 62 years of age, mind you) sounds as good as he did two decades ago, while near-legendary drummer Mikkey Dee still has plenty of pop in his kit, especially on “Buried Alive.”

The bluesy “English Rose” and grooving “Back on the Chain” are an homage to the band’s roots, while the surprisingly brooding “Heroes” emerges as the clear-cut album highlight, with a sordid tale about the battlefield set to the tune of guitarist Phi Campbell’s simple, yet haunting chord work.

A hard rock institution since the 70’s, Motorhead can (and probably will) last until Lemmy kicks the bucket, which at this rate won’t occur for another 30 some-odd years. Motorizer is top-notch all the way through, with nary a bum song

on the album. Should be fun to see how these new tunes stack up this summer on the Metal Masters tour in between the obligatory “Ace of Spades” and “Overkill.”