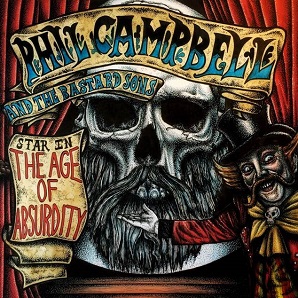 Practically a household name (in metal terms), Phil Campbell is best known for his work in Motörhead, earning the title as the longest-serving member next to Lemmy Kilmister, a feat not to be taken lightly considering the array of memorable faces that have passed on through. Campbell originally split guitar duties with Michael “Würzel” Burston until 1995 when he assumed the role himself up until Kilmister’s passing at the end of 2015. His solo venture, Phil Campbell and the Bastard Sons, takes on a literal meaning — he’s joined by three of his own sons, along with vocalist Neil Starr on their The Age of Absurdity debut.

Lots of ways to co-mingle this with Motörhead’s latter-day output. Really, if you subtracted Starr and popped in Lemmy, it could very well pass as a Motörhead album. While Lemmy was a grunter with a gift for lyrics, Starr is a pure-bred rock singer, perhaps not as dirty or scuzzy as Lemmy, but able to pop and roll with his chorus choices, like “Freak Show,” a number that contains a riff that sounds awfully like AC/DC’s “Girls Got Rhythm.” In effect, this is grit and girth metal, no frills, hoisting heavy riffs, the occasional double-bass tumble (“Skin and Bones”), coupled with hard-nosed rockers like “Welcome to Hell,” “Dark Days” and “High Rule.”

With The Age of Absurdity, one almost gets a better idea of how influential Campbell was in the Motörhead songwriting process. His riffs carry a certain weight that became identifiable with late-period Motörhead, a time many hold in high regard. With the Bastard Sons, Campbell rather forcibly reminds everyone that his riffs were able to hold their own against the mighty, mighty racket that was Lemmy’s bass rig.