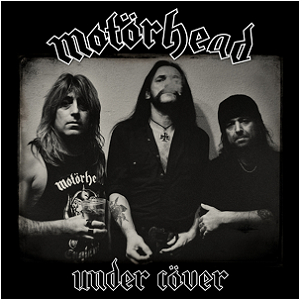 There’s been a slow drip of posthumous Motörhead albums, probably because the band saw fit to release their studio recordings while Lemmy was still around. Surely the band is not a cash-cow ala the fought-over catalogs of Michael Jackson and Prince, but any time a certifiable legend like Lemmy passes there’s going to be renewed interest and no-good-ers trying to swoop in for a quick buck. Thankfully, it appears there’s no such struggle over Motörhead’s legacy. Under Cöver, as the title suggests, is a collection of the band’s recent cover songs. Being that Motörhead often filled their early live sets and singles with cover songs (“Louie, Louie” always being the most predominant), tackling another band’s song has always been of interest to the band. And when these songs are shoved through the vaunted Motörhead sonic filter, the results speak for themselves.

Populated mainly by songs that have already seen the light of day (heck, the band even won a Grammy award in 2005 for their rendition of Metallica’s “Whiplash”), Under Cöver does include two new covers: David Bowie’s iconic “Heroes” and The Rolling Stones’ classic “Sympathy for the Devil.” The nod goes to “Heroes,” though, not just because it’s a superior song, it also gives vastly-underrated guitarist Phil Campbell a chance to tie on some guitar melodies rather than his usual array of gutter-on-the-E-string riffs. Lemmy has his renowned grit and bite on the vocal front, giving the song just enough feel so it resonates on a biker level. While their version of Judas Priest’s “Breaking the Law” is passable (really hard to improve on the original), Ted Nugent’s “Cat Scratch Fever” and Ozzy Osbourne’s “Hellraiser” both benefit immensely from the band’s biting sound and Lemmy’s earthy vocals.

Covers, as we know, only work when a band puts their own spin on them. Motörhead’s sound certainly enables such execution, with Under Cöver emphasizing just how versatile the band really was. After all, Lemmy hated being called a metal band. They played just rock and roll, after all.