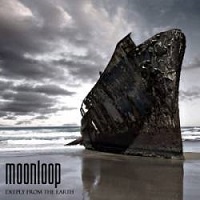 Granted, my personal experience with the world of progressive death metal has often been limited, at least insomuch as the tag is actually applied to bands. The band that most readily comes to mind is Opeth, with Death really equaling out the other part of the equation (Cynic might have originally, but such is no longer the case). The music on Deeply From the Earth owes a great deal to Opeth during their Still Life and Blackwater Park era, almost sounding a little too close for comfort at times. This indulgence in influences aside however Moonloop has enough of a unique voice on its own throughout the 10 tracks on hand make Deeply From the Earth an engaging and worthwhile listen.

Most readily apparent during almost every clean

section within most of the songs is the debt to the above mentioned era Opeth. The use of guitar melodies and the context in which they’re applied in a track like “Fading Faces” is absolutely fantastic, the melody progressions and use of cascading solos/leads is mesmerizing. Similarly the influx of acoustic/jazz underpinnings on the track “Wailing Road” gives way to more Opeth vibes, this song especially indicative of Blackwater Park. The liquid quality of much of the melodic moments across the album makes it easy to get lost in, the music simply washing over the listener.

The inherent differences come in the very clean and precise forays into almost technical death metal the band breaks into the rest of the time. These moments are scattered sparingly in between the large melodic passages that dominate most of the songs, most readily apparent in tracks like “Legacy of Fear” and “Strombus.” These moments however rarely last very long and never make up the entirety of an individual song, serving instead as anchors for the flighty and expansive melodic passages to run rampant and work their magic.

The Opeth shadow is one that has seen continual reference here because in part it’s an impression left after the initial listen and reinforced with repeated listens. Latter era work from Watershed even makes its way into colossal album closer “Atlantis Rising,” arguably my personal favorite track here. This is the band’s second release and a couple of songs are carried over from the band’s self-released 2005 effort Released From Duality, albeit in re-recorded form (“Deceiving Time” and its acoustic heart is a particular treat). As such the more readily audible presence of influences is understandable.

There’s a lot of future promise in Moonloop and a lot to love about them as-is, future releases from the band should see them growing exponentially and making the sounds they utilize their own. For those poor souls lamenting the turn Opeth took with Heritage, look no further. For everyone else, a new multi-dimensional beast is upon us with a lot to offer. Highly Recommended.