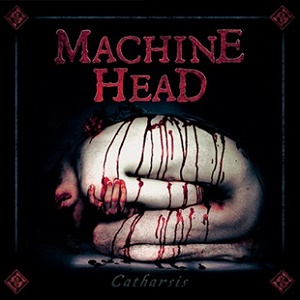 Back in 1994, this scribe remembers getting an advance tape in the summer for Burn My Eyes, the debut album from Machine Head – and knew the game-changing dynamics this record would have. Melding together a potent groove, hardcore, and thrash cocktail – songs like “Davidian” and “A Thousand Lies” exemplified the shift in the marketplace where intricate musicianship and flashiness took a back seat over stripped-down riffing and crushing, aggressive hooks and almost mechanized tempos. Over the course of their 26-year plus career, they’ve charted their own path – making waves for their nu-metal/rap forays for The Burning Red and Supercharger, while being heavier and more thrashy during The Blackening days. Coming into their ninth studio record Catharsis, guitarist/vocalist Robb Flynn and the gentlemen of Machine Head can pretty much go in whatever direction the muse suits them – it’s all a matter of taste at this point.

At 15 songs and over 74 minutes, this is quite a maximum output for value that the band enjoys exuding – especially considering the 3-4 year lapse between recordings at this stage of their career. Much of this material contains those bouncy grooves, quick venomous Flynn-raspy vocals, and elements that veer back into that late 90’s nu-metal sheen that just doesn’t sit well to these ears. Which is a shame – as many of the guitar riffs sound robust and alive to kick your teeth in (check out “Volatile” and “California Bleeding” for two prime examples). But the banal, low-tuned squeals that roll to the rhythms of Flynn’s rap schemes for “Triple Beam” (where you ‘balance life on a triple beam’ reverberates beginning to end) almost caused abandon ship mode, and the acoustic darkness for “Behind a Mask” seems more well-suited for Godsmack or old Alice In Chains audiences than anything Machine Head fans consume. On the flip side, Dave McClain’s superb tempo juggling skills come to the forefront along with the Flynn/Demmel rhythm shift work during the epic “Heavy Lies the Crown”, one of the band’s most versatile mood movers in well over a decade.

Zig zagging when people probably expect more of the same could be a good thing to keep interest fresh for Machine Head. But one doubts that most who jumped on the band during the late 90’s and early 2000’s stuck around this long into the group’s career – moving on to trendier, more hip pastures. At least we still have Burn My Eyes to treasure…