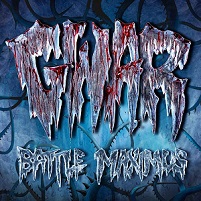 A rare serious moment for GWAR, as Battle Maximus is dedicated to fallen guitarist Flattus Maximus, aka Cory Smoot, who tragically passed away during the band’s fall 2011 North American tour. It’s probably the only thing that could get Oderus and crew to break their cartoonish facade, but it’s a poignant tribute, showing how much the band cares for one another…you almost have to when you’ve been at it for this long. Nevertheless, staying high and tight with the metallic leanings that started all the way back with 2004’s War Party, Battle Maximus thrashes and gashes in a manner that could only come from GWAR, and it certainly lends credence to how capable the band is musically.

With more tales of intergalactic adventures in tow, Battle Maximus puts its head down, and runs right into the fray via the spitfire “Madness at the Core of Time” and catchy “Bloodbath.” The band’s punk background still peeks out on occasion, therefore pulling back on sheer heaviness in lieu of zesty, vocals-a-plenty romps ala “They Swallowed the Sun” and the goofy “I, Bonesnapper,” which has a truckload of humorous quips that lighten the mood (“Nobody likes me anyway!”. And while there’s no true detour from the up-tempo proceedings, the closing pair of “Falling” and “Fly Now” go a long way toward resolving whatever potential hang-ups the band might have encountered in terms of recording an album without Smoot.

At this stage in their career (over 30 years, 13 albums in), GWAR have become more than just one of metal’s most entertaining live acts; there’s this sadistic vibrancy to Battle Maximus that improves upon Bloody Pit of Horror, all the while remembering their fallen brother. Ultimately, it’s the band’s resolute ability to put the blinders on that has enabled them to hang around this long. Plus, we don’t want to get smacked with a cuddlefish.