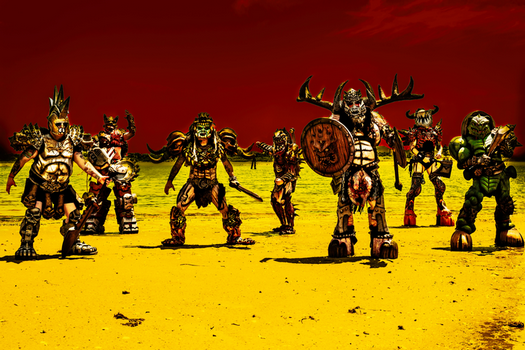 The Scumdogs of the Universe themselves, GWAR, have been doing there own thing for over 30 years. Going all out in their quest to conquer humanity through heavy metal music, over-the-top violence, and stirring up controversy, it’s easy to see how the band has managed to survive. But it hasn’t been without some sacrifice. They lost Flattus Maximus in 2011, and then Oderus Urungus in 2014. Still the band has carried on, with the recently released Blood of the Gods being their first release without Oderus.

With new vocalist Blothar at the helm, Blood of the Gods finds itself with a diversity of tracks that seem to encompass the GWAR experience throughout the years – from metal to punk. Eager to get a fresh take on what they’ve accomplished this time around, we spoke with lead guitarist Pustulus Maximus, who gave us the inside scoop about recording with Jesus himself, killing people on stage, and how they deal with the increasing sensitivity of the human race.

Dead Rhetoric: You recently finished up the Warped Tour over the summer. Did you view this as a new way to gather followers that for some reason, may not have heard of you?

Pustulus Maximus: Yeah, you gotta have fresh blood. That goes without saying. That was the whole purpose of the Warped Tour. It was so we could gather new fans, and plus underage kids aren’t underage forever. Once they get to be adult age, there’s just no fun in it anymore – in the sexual kind of way.

Dead Rhetoric: In regards to touring over the years, do you feel you have to continually up the ante in the live show to deal with humanity’s increased desensitization to violence?

Pustulus Maximus: One would assume that would be the case, but it seems like if you take a look at anyone’s daily Facebook account, I think people today are way more easy offended today than they were twenty years ago, by far!

Dead Rhetoric: If they are more easily offended, then are they better targets for the band’s antics?

Pustulus Maximus: Yeah, I guess you could say that. But then again, I think that today’s crowd is a bit more fickle as well. Part of the attraction with GWAR is that you are going to be offended at the show. These kids today, they wear their hearts on their sleeves…and it’s not just the kids, it’s the adults too. You offend someone and they take it to heart. Everything is unforgivable. The PC world of justice is bringing American life down the tubes quicker than we can exterminate it. I don’t know who is going to take your freedoms first, the right or the left.

Dead Rhetoric: What were some of the challenges that you had to overcome with this being your first new album without Oderus?

Pustulus Maximus: Making the record without him was a challenge. Without having a strong creative force like that, we had to basically learn how to be a band once again. Just like after the loss of Flattus Maximus. It’s a very unique position to be have to be in, but we handled it well. I think we put out a record that’s badass. I’m very happy we did it. Just starting to play together is the key. Not only is Blothar newer to the fold, but so am I. The band undergoes a lot of different changes – we don’t want to put out a record that sounds like we are trying to imitate something we have done in the past either. Which is kind of easy, because I’ve never written a record before for the band. So that adds a fresh flavor to it. So if you hate it, you can blame it all on me! It was definitely a collaborative effort for the entire thing. It’s cool…check it out!

Dead Rhetoric: So what do you feel is the ultimate goal of the album at this point?

Pustulus Maximus: To make money! The goal of the record is to prove we can stand on our own two feet. Quite frankly, as artists we just want to make good sounding records with great songs on them. If you couldn’t tell, by the fact that most of us work at Burger King and fire-proofing factories and as prostitutes – we still have day jobs. We sell drugs, things like that. Pedaling narcotics and vape juice. Obviously we don’t really make the music for the money, because nobody buys music anymore anyway. So it’s important to make a good record, because we want to make a good record. I put my loin cloth on one leg at a time, just like any other Scumdog. But when my loin cloth is on – I make gold records.

Dead Rhetoric: What drew you to cover AC/DC’s “If You Want Blood?”

Pustulus Maximus: Because we knew that people wanted blood, and so did we. Honestly, all of the cover songs that we have done in the last few years all come from us performing on a show called AV Undercover. AV Club is a subsidiary of The Onion News Network, and they have us every year. They pick a dozen bands and a dozen songs – the songs are picked at random. We pick from the list and we make it funny – this time we decided we wanted to rock out. It was either that or Dolly Parton’s “9 to 5,” and I was not going to let that happen.

Dead Rhetoric: You were talking about working the daily grind – that could have worked too…

Pustulus Maximus: Well we have to pretend that we don’t have jobs – we want to look like rock stars when we are on stage. You can’t be completely honest with your music. What would the fun in that be?

Dead Rhetoric: There were several interviews I saw where it was stated that Jesus himself helped in the recording of the new album. Is that true?

Pustulus Maximus: Absolutely true. He lost a wager with us a long, long time ago and owed us a favor. I believe it was a basketball game if I’m not mistaken. Sometimes you just have to collect your debts. Jesus Christ produced a great record for us…not that we did too much listening, but sometimes the record label wants to see a producer credit on there so that they are happy. Also, we didn’t want to move microphones ourselves anymore.

Dead Rhetoric: So what was it like to work with him in the studio?

Pustulus Maximus: Spiritual. There was a lot of imbibing of spirits. I was blacked out half the time…I’m drunk right now. I don’t even know what I’m talking to you about.

Dead Rhetoric: In getting back to the stage, has it gotten easier to find people worth killing over the years of the band, with the general rottenness of society?

Pustulus Maximus: It’s always easy to find someone worthy of dying for the cause. The greatest trouble lies in finding someone who is relevant to kill. If you have also noticed in today’s world of social media, the attention span is about a week, week and a half before people move on to something new that they are offended about. The trending news topics typically are a popular TV show or season finale, or what is offending someone – whether it’s kneeling for a football game, or a statue/flag that’s offensive, or guns.

You never see topics like fixing world hunger trending, no no no, that would require compassion and not some kind of fake-out rage. So we can pick someone who is offensive today, but by the time we go on tour, people will have moved on and forgot about it. I think that’s a problem with the world that lives in their phones. If you walk this Earth and pay attention to what’s around you, it’s a little bit more interesting…and not so fleeting either.

Dead Rhetoric: Being able to travel intergalactically, what has kept you here on Earth for the last 30ish years?

Pustulus Maximus: Mainly that our passports were revoked, and we can’t get a vessel good enough to get us off the planet.

Dead Rhetoric: Did you ever think about crowdfunding or something like that?

Pustulus Maximus: We’ll leave the crowdfunding for bands that get their stuff stolen on tours – they seem to occupy most of the floor space there. But you know, maybe. Really, I just want a .45 and a single bullet, and I’ll find my own way out of here.

Dead Rhetoric: The big question, since you have a pretty good grasp of politics, is have aliens taken over the White House?

Pustulus Maximus: Absolutely. Why not? Why wouldn’t they invest? But I think the global stage is much more entertaining than the simple White House. I think the main function of the government today is to keep people fooled; keep them guessing. Think about it. The most obedience servant is going to be the one that doesn’t know that they are one. A cog in the wheel. The cow doesn’t know that it’s purpose is to be ground up for food later. Neither does the chicken, or the plant…these things are unaware of their role and how they are used by a higher power.

That is definitely true for human kind. You don’t realize that you are just worthless pieces of shit that run the Earth. It’s not necessary for yourselves. You just have to fool yourselves long enough to enjoy it; long enough to see retirement age. Then at that point, everybody turns their back on you. And that’s the way that life should be.

Dead Rhetoric: So are phones pushing that same agenda? The idea that you are on your own, doing what you want to be doing, but you have your face buried in a phone and not seeing anything.

Pustulus Maximus: Pretty much. People don’t pay attention to what’s important. If you’ve ever seen the documentary They Live, it features Rowdy Roddy Piper – that explains a lot. You aren’t going to be free until you abolish currency at this point.

Dead Rhetoric: We’ve got a couple of years at this point. Would you consider running for office in 2020?

Dead Rhetoric: Will you be doing anything extra special for next year’s GWAR-B-Q due to skipping it this year?

Pustulus Maximus: It’s hard to say at this point. It requires a lot of time and energy. I can’t speak for the band on this one, but personally I don’t care for it. I think it brings too much amusement to people and that’s something I simply will not stand for, or entertain the idea of doing another one. It’s the last thing I want to see at a GWAR show is a smile on somebody’s face.

Dead Rhetoric: So what can we expect to see from GWAR in the near future, besides the new album of course?

Pustulus Maximus: You can expect to see blood and guts, and full penetration on stage. You can expect to be wowed. You can expect to see your lords and masters give everything to you. A normal band doesn’t do that. They don’t expel bodily fluids, they aren’t sacrificing anyone for you. We kill people on stage. As wonderful as it is for us, we don’t do it for purely our own enjoyment. We do entertain you because it’s an easy way to fleece you of your hard-earned dollars and provide you with a few moments of entertainment.