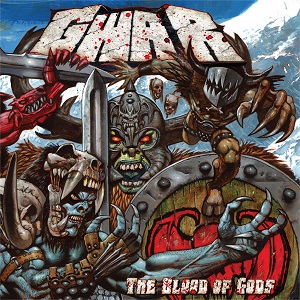 So formidable is the brand of GWAR that it has survived the 2014 passing of its most visible (and valuable) member, Oderus Urungus, otherwise known as Dave Brockie. The band’s subsequent run of touring has led to a reinvention of sorts, but also, a homecoming. Drafted into the vocalist spot is Mike Bishop, who played with GWAR up until 1994’s This Toilet Earth as Beefcake the Mighty and now plays the The Beserker Blóthar character. All this results in an otherwise rollicking album, The Blood of Gods, the first post-Oderus album of GWAR’s career.

Perhaps less metal than the last few GWAR studio albums, The Blood of Gods employs largely the same vim and vinegar, reliance on humor and back-story as before, just with songs without as much metallic weight. It certainly comes in handy on a cut like “Viking Death Machine,” which is clearly the best song of the bunch because of Blóthar’s vocal razzing and tumbling beat. While “El Presidente” and “I’ll Be Your Monster” spew forth a classic rock boogie and jangle, the chunky “The Sordid Soliloquy of Sawborg Destructo” provides the best glimpse at Blóthar’s vocal abilities, even as he shares duties with Sawborg Destructo, who is listed as “Annoying Nemesis, Annoying Vocals.”

If there’s any further indication of where GWAR is sonically, look no further than their cover of AC/DC’s “If You Want Blood…You Got It.” The Aussie’s imprint is all over The Blood of Gods, although you’d be a damned fool to think GWAR have dropped down to full sonic aping territory. Their career as healthy as ever, GWAR have once again embraced their role as metal’s indomitable, arctic characters. Somewhere, Oderus and his cuttlefish, are smiling.