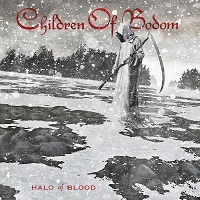 We’re a bit curious to see if Bodom will stop short of saying they never should have left Nuclear Blast in the first place, this, after over a decade on Finnish mega-label Spinefarm. The years Laiho and crew were on NB were some of the band’s best, if not their most lauded in terms of underground respectability. They’ve long since shed the neo-classical-on melodic death metal pairing, going for a razor-sharp straight-up metal attack that has given them ample room in which to tread…and shred. In any event, Halo of Blood feels like the logical successor to 2011’s Reckless Relentless Forever, and it’s not a dud like Blooddrunk.

As their career has progressed, Bodom has started to sound less and less Finnish. Well, they don’t sound American either, though. There’s just a lot of attitude in these riffs, if you want to put it that way. Angular, and sharp as a tack, COB routinely retains its zip throughout Halo of Blood’s ten songs, some of which are borderline explosive, such as “Scream of Silence” and the thrashy “Waste of Skin.”

Keyboardist Janne Warmen plays a big role, perhaps serving as the last reminder of the band’s Yngwie worship days. His springy keyboard sound adds some weight and excitement to “Bodom Blue Moon,” while providing the necessary toned-down atmosphere for the album’s ballad, “The Days Are Numbered.” And when Warmen hooks up with Laiho and second guitarist Roope Latvala on a number like “Damaged Beyond Repair,” it’s a caustic reminder of how much the band values interplay on their instruments.

With the band slated to take part in this summer’s Rockstar Energy Drink Mayhem festival, it’s shaping up to be a rather important year in North America for Children of Bodom. They’ve long conquered this territory, and Halo of Blood might do little to increase their exposure here, but you can’t mess with the spot Bodom is in at the moment. They’re one of the few bands to successfully jump off the cliff from their early sound and still have the wares to show for it.