With the heap of snooze-fest doom bands cropping up everywhere with their rehashed Sabbath riffs and/or ubiquitous female-delivered occult vocals, it is always refreshing to hear a new band playing doom metal in the vein of Candlemass, and killing it.

Sweden’s Below deliver their debut album with Across the Dark River, an impressive work of epic doom metal worthy of any comparisons no doubt made to the masters of the genre.  As with most any band, real success depends on the singer, and Below has quite a voice in singer Zeb, the real star of the show (taking nothing away from the entire group of adept musicians here).   With big-time ability he brings to life a world of darkness and vivid paintings of imposing condemnation.  A powerful voice with range and depth, there are notes of Ronnie James Dio in him that one could draw a connection to.

Produced by King Diamond’s Andy LaRocque,  Across the Dark River is a deep and large sounding record, expertly engineered to allow this five-piece to bring forth the heavy.  With two guitarists in their midst, harmonizing riffs abound and wreathe around the crushing rhythms in this unhurried affair.  Slow and heavy is the direction here, perfectly suited for the atmosphere of the album.  Steady, rock-solid drumming, employing doubles in tasteful fashion to enhance the plodding gallops, complete with nice fill work prove this band a complete, real deal.  Subtle use of keyboards to enhance the ominous vibe on the album work perfectly.

Strong choruses with memorable melodies run throughout, Below even using choir-style singing for added gravity as with opener “Trapped Underground.”  Album standout “Mare of the Night” displays all facets of the band in top form, which you should listen to here.  For the quality that the album deals in spades, it could be said to lack in diversity, but this slab of monolithic doom really doesn’t suffer for it – no, Across the Dark River is an album that fans of epic doom will certainly enjoy. 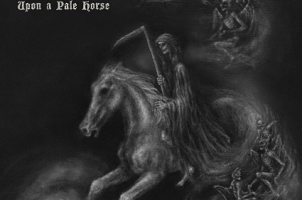