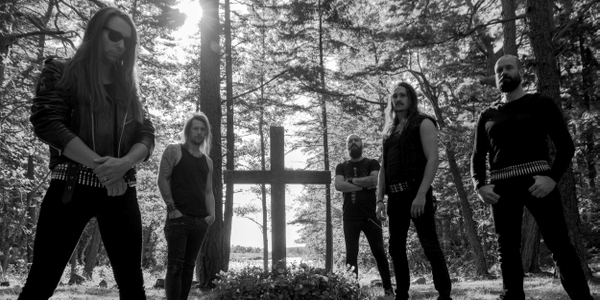 There are a few points on Below’s new Upon a Pale Horse where you can imagine the Swedes, top billing on some massive Euro festival shindig, weaving their forceful, triumphant doom upon a mass of new devotees. Up-and-comer throat Zeb leads the festival festivities, his melodies and cadences crafted upon reflection of those cagey, classic singers, the type who can transform a song with a simple bellow while a twin guitar surge proves equal parts Sabbath and NWOBHM gracefulness. Their songs move mountains but don’t belabour the point, making headway as the dead-on cross between old doom channels and new. It all seems to be right there for the Swedes, which is why they’re receiving a hearty endorsement here and everywhere else.

The follow-up to their 2014 debut, Across the Dark River, Upon a Pale Horse is emblematic of a band who has already found their way, creating a masterful foray into epic doom. Such things were on our mind when we passed along some Q’s across the (dark) pond to drummer Doc, who was all too kind to respond…

Dead Rhetoric: You’re Swedish. And an epic doom Swedish metal band at that. Do you feel any sort of responsibility to eventually pick up the torch when Candlemass hangs it up?

Doc: Ha-ha, if we can pick up where they are, of course, that would be amazing. They are such legends of the genre. However, I truly believe that Candlemass is Candlemass and Below is Below. So perhaps we can create our own fire and light up our own torch with it.

Dead Rhetoric: Along those lines, the doom metal scene is pretty healthy these days. Is it a good time to be a doom metal band?

Doc: Yeah, doom metal seems to have grown in the past years, but it still is a small sub-genre of course. A lot of great bands have emerged and that has really helped the scene grow and in a world of extremes, a lot of people perhaps like it slow as well. There are a lot of really great doom festivals, especially here in Europe and that also helps the genre, of course.

Dead Rhetoric: Across the Dark River was not only your first release, but your first album with Metal Blade. What was the entire experience like in releasing the album and performing dates in support?

Doc: It was crazy! Just being a part of Metal Blade is really amazing, and all the people have been really supportive and nice so it’s been all good. All performing dates have been great, I truly believe that the best way to experience us is to see us play live. We go all-out to create an atmosphere and get people involved, and all the great people who have been at the shows are, of course, a huge part of that!

Dead Rhetoric: Did you learn anything new about the band during that album cycle?

Dead Rhetoric: Upon a Pale Horse, to these ears, is a big step up from Across the Dark River. It’s epic, but also has tight, compact songs. What was the approach going into the album?

Doc: It’s not only your ears, I totally agree that this is taking it up a few levels. I really like Across, but to me, Upon a Pale Horse is on a totally different level. We didn’t really have a particular approach set when we started to write this, but we knew that we could top Across. When we wrote this album we had a ton of material in terms of riffs and melodies so we really could choose freely, and that in combination with the fact that we really feel that we have grown as songwriters made the songs more diverse, but still containing the same core as the previous one. I would say in that sense that we have more found “our sound.”

Dead Rhetoric: Does the album title or cover (which is killer) have any significance?

Doc: Yeah, the artist Amanda, who did the cover for Across the Dark River, did an excellent job once again! The story behind it really is that when we had all the song titles we all said “Upon A Pale Horse”! The song really feels as a title track, and the title really fits as well. We had seen an old painting by a Swedish artist that I can’t remember the name of, but we wanted it based on that, and it turned out great. It fits the whole vibe of the album.

Dead Rhetoric: Speak to Zeb and his most-excellent vocals. He totally kills it on a bunch of the songs, especially “Disappearing into Nothing” and “1,000 Broken Bones.” In your own estimation, how did he develop?

Doc: Zeb really is at his best thus far on this album. He has been a really, really good singer for a long time but as he has matured, he has become great. He has better control of his voice and can really get the lyrics out more in terms of the emotions. He has listened a lot to Riot, Crimson Glory, Queensrÿche and such, and well, those are pretty good singers to get influenced by. But I must disagree with you, ha-ha, though, he sings excellent on the entire album, the best in my opinion in terms of vocals is “The Coven!”

Dead Rhetoric: How did Alan (Averill) from Primordial end up contributing a spoken word bit on the album?

Doc: Well, when we were finished writing the song “Upon a Pale Horse,” we felt that a speech would really get the song started in a great way. We wanted someone with a really dramatic voice and someone who, of course, speaks English as his native tongue. We talked and said that “Alan would be great for this,” and since he works for Metal Blade, we have contact with him on a pretty frequent basis, so we asked him and he wanted to do it and he did an amazing job. Pretty simple story, ha-ha.

Dead Rhetoric: What’s the live show approaching going to be after the release of the new album?

Doc: Well, right now we sadly haven’t gotten any shows booked right now. But our booking agency Doomstar Bookings is working on that and hopefully we can get out on the roads pretty soon. We would love to go play a lot of festivals as well; we have never played in the U.S., that would be awesome. We all play music to play it in front of people!

Doc: Hopefully a lot of live shows, if anyone is interested, just contact Doomstar! And we have also already started looking at new material, we don’t want to have three years in-between albums again.