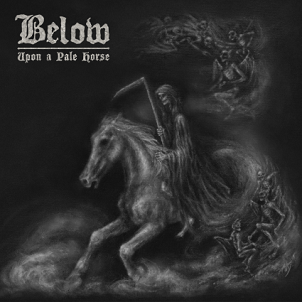 No shame, really, in trying to become this decade’s Candlemass. If you’re Swedish (like Below are), fancy epic doom (check) and have the vocalist to do it (check again), then why not? Below’s 2014 Across the Dark River debut was worthy, stroked across those familiar plains where simple, Sabbath-ripe riffing met up with the vocal acrobatics of vocalist Zeb, whose real name is Sebastian Jansson. (Dude would be better off going under his actual name, by the way.) Their sophomore Upon a Pale Horse is simply a capitalization on the debut, making the rounds that Below are to be taken seriously.

As indicated, anyone who has spent even a casual amount of time with Candlemass’s peak catalog (Epicus up through Tales of Creation) can get around on what Below are doing. Their songs are often careful plodders, with those basic chord mechanisms serving as the foundation for Jansson as soaring leads from the guitar tandem of Berg and Paud respectively. Not counting the sometimes meandering nine-minute title track, the guts of the album is particularly choice, like the bruising “Disappearing into Nothing” and fantastic “1,000 Broken Bones,” a sure-fire doom stomper if there ever was one. And let’s not underscore Jansson’s value. For a scene in desperate need of actual, tried-and-true singers, Jansson more than makes the cut, displaying the sort of old-school savvy that actually may make him ripe for the taking from a bigger, more established band. (Not like we’d want that to happen, though.)

Perhaps the truest epic doom representation to come down the pike thus far in 2017, Below’s Upon a Pale Horse is the blissful union of the truisms that many still abide by, all the while played with a knowing look toward the future. And really, when the doom old-timers eventually bow out, someone has to be around to pick up the torch. Look no further than Below.