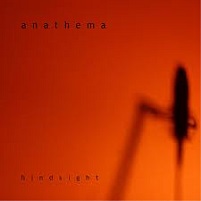 Oh Anathema, where have thou been? Little has been heard from the Anathema camp since 2003’s striking A Natural Disaster, save for some odd EP’s and DVD’s, but the back-tail of 2008 figures to be active with Hindsight and the forthcoming Horizons slated to be released in October. The wait should be worth it – Anathema has yet to disappoint.

Consisting of re-worked acoustic versions of some of the band’s classic numbers, Hindsight is pure brilliance all the way through. Of course, Anathema have largely relied on acoustic guitar

work for the last decade, so they’re well in the comfort zone on this 10 song effort with nine classics and one new tune, “Unchained.”

Starting with “Fragile Dreams” off 1998’s departure Alternative 4, the band takes what was once a pensive and high-strung number and turned it into a delicate, emotional beauty. Likewise for the graceful “Leave No Trace,” although the song

(from 2001’s A Fine Day to Exit) was already toned-down considerably, laced with gorgeous melodies and acoustic guitar work.

The sparse “Inner Silence” (also off Alternative 4) is made even more minimal and haunting, while the lead single from A Natural Disaster, “Are You There?” is punctuated nicely by singer

/guitarist Vincent Cavanagh’s emotive delivery. “Angelica,” off 1997’s classic Eternity album is as far back as the band goes, retaining the flowing guitar lines that guitarist Danny Cavanagh made famous back in the mid-90’s.

”Temporary Peace” might be the best song here. A buried gem on A Fine Day to Exit, the song is every bit as minimal and desperate as the original and is once again highlighted by the closing vocal climax via Vincent and female vocalist Lee Douglas along with some well-placed violins.

It is no secret Anathema never got its just due both in the metal scene and mainstream, but those in the know realize the band’s innate ability to work the listener over with the barest of essentials. With nary a dud in their catalog, Anathema’s career has unfortunately stalled for the better part of this decade, which remains one of the true crimes of the century. Nevertheless, Hindsight is genius through and through; the embodiment of pure musical

emotion and craftsmanship, metal or not.