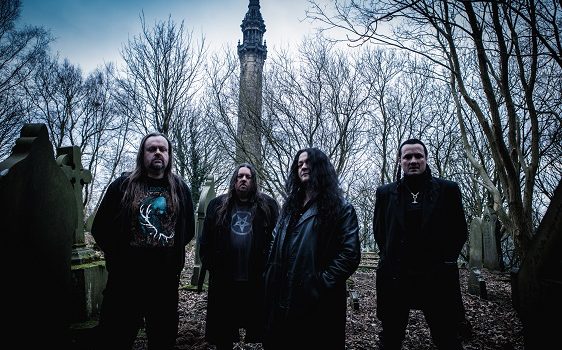 Despite all appearances to the contrary, Godthrymm doesn’t pit introductory violins against forlorn melodies. No Gothic tapestries abound. No solemn reflections of love lost, either. Instead, the freshly-minted unit, featuring former My Dying Bride guitarist Hamish Glencross (also on lead vocals), ex-Solstice guitarist Chaz Netherwood, Malediction bassist Rich Mumford and current MDB and former Anathema drummer Shaun Taylor Steele, team up to create a rather heaving, if not epic EP in the form of A Grand Reclamation (Transcending Records). Sure, you’ll hear familiar patterns of British doom, but where their previous (and current) bands choose to dwell in darkness, there’s a stark reality to the four songs found here, topped off by Glencross’s roving vocal approach. It’s a nifty little away around expectations and trying to live up to the unbeatable stature of their resumes. Godthrymm instead, is more like epic doom titans Candlemass, While Heaven Wept and fast-risers Pallbearer. Hence, this round of Q’s, which the band teamed up to answer:

Dead Rhetoric: How do four old friends, who, have been involved in the metal scene for quite some time, come together? Was this a long time coming?

Chaz Netherwood: For me personally, it is long overdue we shared the stage together again. I’ve missed playing with the others and I’m thoroughly enjoying every minute of it. The band has such a chilled vibe and everyone is really laid back and easy going. This is in stark contrast to previous incarnations that we played in together. When I got the call from Hamish about doing this, I didn’t even give it a second thought. It’s long overdue in my opinion.

Hamish Glencross: Absolutely. It’s been a long time since Chaz and myself had worked together, whereas Shaun and myself had spent years together in My Dying Bride. Since putting the idea forward of us creating this band though, things happened very quickly, fueled in no small part by the desire to work together again, and what a joy it’s been reconnecting.

Dead Rhetoric: To the band, is it a “fun” thing, or, something that on some level, is serious?

Shaun Taylor-Steels: We do take Godthrymm very seriously, we are putting in a lot of time and effort with the intention of taking the band to higher levels…. on the other hand, we are a relaxed bunch, very humorous at times so, it’s a perfectly healthy balance, just as it should be.

Dead Rhetoric: You’ve each had your level of success in other bands. How would you define “success” for Godthrymm?

Taylor-Steels: We have been invited to play Bloodstock Open Air (U.K.) and also In Flammen Festival (Germany)…these are very popular festival’s, we feel so very honoured to have been asked to play them. We feel that the band will just go from strength to strength.

Dead Rhetoric: At this point, there have been so many variations of doom. Where do you think Godthrymm fits?

Glencross: Well, stylistically, we’re incorporating a sense of the epic contrasted against the melancholic, all delivered with a very respectful nod to our past bodies of work. We’re more concerned with satisfying ourselves artistically with what comes most naturally, rather than writing to fit a specific label or genre, and this is just what comes most naturally for us.

Dead Rhetoric: Hamish’s vocals are quite fantastic and are one of the defining elements of the band. Do you think they will remain a focal point?

Netherwood: I think Hamish’s vocal style is already an integral part of the band’s sound. I’ve described his style as reminiscent of a mad wizard screaming at the moon on the Yorkshire moors on a blistering winter’s night at the witching hour. I think they are quite original for a doom band and personally cannot wait to see how the vocals develop along with the music.

Dead Rhetoric: Is the idea with the EP to sort of test the waters, then think about a full-length?

Glencross: Well we already have more than enough material for an album now and the newest material has a drive and focus that reflects our ongoing development as a band. We can’t wait to record again and hope to do as soon as possible. Let’s see how people react to the EP!

Dead Rhetoric: What will the live show approach be? And, do you feel obligated to perform covers from your previous bands?

Glencross: The live show will be an honest display of what we are; old friend pouring their hearts into new music and sharing with those who care to listen. Whilst we love and respect our previous accomplishments, we have no desire to play anything from our previous bands.

Dead Rhetoric: Each of you has quite a bit of experience. How will that benefit from Godthrymm?

Mumford: It’ll hopefully allow us to not repeat the mistakes of the past!

Glencross: Heh-heh! Seriously, every past experience should inform and influence your future actions. To do otherwise would be quite literally psychopathic.

Mumford: Play a load of shows and finish writing and recording the debut full length.

Glencross: Yeah, we’ve been very honoured with the offers of shows that we’ve got so far and hopefully those offers will continue. We want to be able to bring our music to as many people and places as possible. Thank you.