Probably one of the most underrated bands of the death metal spectrum at the present time, Allegaeon works off of a simple premise and turns it into something incredibly remarkable.  Namely, piecing together monster riff after monster riff and throwing in as many solos as possible to the melodic death metal formula.  It was this idea that held together their sophomore effort, Formshifter, and turned it into one of the strongest releases of 2012.  With the addition of new drummer Brandon Park and guitarist Michael Stancel, Allegaeon seems ready to step up their game beyond the riff-tastic and into something truly special.

While the basic concept of Allegaeon is still the same, Elements of the Infinite is the first album to see the band show some restraint and focus more on “the big picture.”  Meaning, instead of trying to barrage the listener with riff after riff, solo after solo, it seems the band really tried to create lasting songs (while still punishing the listener with as many wicked riffs and solos as possible).  The inclusion of orchestrations (courtesy of a collaboration between Greg Burgess and Joe Ferris) bring a new dimension to tracks such as “Threshold of Perception” and “Through Ages of Ice – Otzi’s Curse.”  Nowhere is it more clear of the band’s new found intentions than that of the epic 13-minute closer, “Genocide for Praise – Vals for the Vitruvian Man.”  Utilizing these orchestrations to enhance, rather than dominate the songs, “Genocide for Praise” rises and falls in spectacular fashion, everything a closing song should be.  Also worthy of note is “Biomech II,” a new variant off of an old classic, “1.618” in which the band transcribed the golden ratio into musical form in the most infectious way possible, and the more progressive riffing of “Gravimetric Time Dilation.”

Allegaeon has always devoted lyrics to science and space concepts, and Elements of the Infinite is no exception.  In addition to the already mentioned golden ratio of “1.618,” topics such as Dyson Spheres, black holes, the ice age, and 3D organ printing are some of the ideas presented throughout.  While Allegaeon are definitely not alone in this area, Ezra Haynes lyrical approach provides intellectually interesting and thought-provoking concepts in ways most other bands do not (in other words, this gets the official science teacher stamp of approval).

Elements of the Infinite stands as the culmination of progress that Allegaeon have been working towards since conception.  Easily one of the best albums you will hear this year, it’s time for Allegaeon to have their moment of glory.  Equal parts visceral and cerebral; this is basically melodic death nirvana. 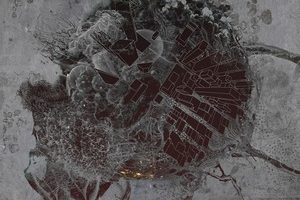