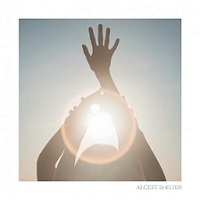 We already knew they are something different, but Alcest will still find ways to shake up the scene. They have long been recognized for their innovative intrepidity in mending their own branch off black metal, but never had they taken their work as far as completely erasing all dark influences, until now anyways. Drifting even further from the threshold, Alcest have forgone all their metal incentives, save the serenity of atmospheric and emotive qualities. With its mystic core, rapturing ambiance, placid scenery, and optimistic temperament, Shelter is an inversion of everything considered metal.

The single-worded title is an abridged elucidation of the album’s deeper meaning. The songs express the universally felt sentiment of security that can only be found in shelters, but not limited to walls and roofs, quite the contrary. Neige found his shelter and escape at the sea, where he’s been struck by waves of inspiration. Shelter is an aural escapade brought upon by the yearning to break away from material existence and reflect on the inner-self on a more spiritual (or nonphysical, whichever you prefer) level.

In case you were wondering, Neige’s harsh vocals are as gone as a paper boat at sea. Don’t try looking for them, because not one aggressive syllable is there. Besides, this euphoric album is not so much for listening to, it’s for musing with. When the night looks gray and Gojira has been blaring in your ears all day (you know you love it) but it’s time to wind down and find sanctuary, sail into ecstasy through the hazing hymns and illuminating fixtures of light in Alcest’s newfound Shelter.