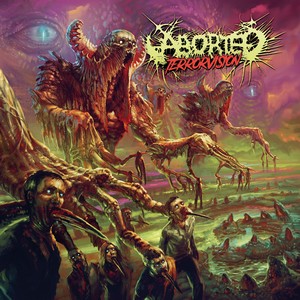 With a string of consistent releases to their credit, along with an embrace of the B-horror movie themes in greater propensity, Aborted have been riding a creative high for some time. While many of past releases more or less just perfected what they had been doing to an incredibly sharp edge, TerrorVision is the first release in quite some time that attempts to make some distinct alterations to the Aborted template. And the good news is that it all works, making this the band’s strongest release in recent memory.

While some may be bracing for huge changes after that opening, it’s not a total overhaul. Aborted is a groovy, thunderous death metal machine and they always will be. TerrorVision simply pushes the boundaries a bit while seeing them continue to make the most addictive yet punishing riffs imaginable. The changes alluded to are all in the atmosphere. Instead of simply steamrolling through every single track with no remorse, tracks like “Vespertine Decay” and “Exquisite Convinous Drama” take a few moments to create a sense of dread and despair – building diversity into the tracks and making them feel a bit darker in tone than some of Aborted’s previous material. It meshes well with the horror movie mentality as well as bringing in a larger sense of maturity. Of course, all is not lost for those that want a blistering assault, with “Deep Red” being a quintessential example of how Aborted does what they do best – catchy grooves and a penchant for speed bursts. One can’t overstate the importance of sly melodies that Aborted continues to employ into otherwise frenetic songwriting, with “The Final Absolution” and “Squalor Opera” being some of the band’s strongest cuts in this area.

TerrorVision takes the Aborted template and gives it even more depth, resulting in an album that’s just as visceral as anything they’ve ever done but with a brooding, ominous feel behind it. A solid upgrade to a formula that was already working quite successfully, and an evolution that no fan should be disappointed in. Certainly one of the most addictive extreme metal albums of 2018 so far. 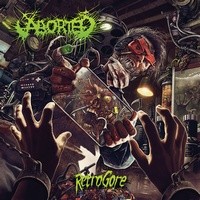