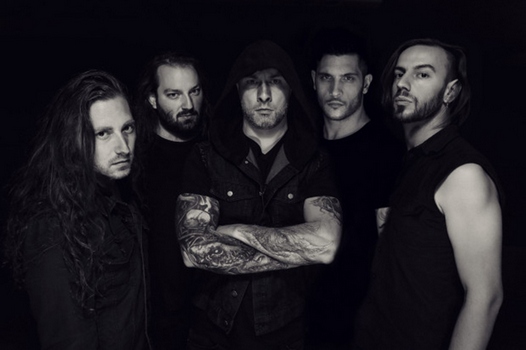 The fun-loving, crazed members of Aborted are never ones to slouch. Having really hit a stride in the last decade with their bludgeoning yet memorable approach to extreme metal, we are approaching the release of Maniacult, the follow-up to 2018’s Terrorvision. We speak to vocalist Sven de Caluwé about the band’s new mascot, COVID impacts on the recording process, consistency, and the thought process behind their unique pre-order bonuses, amid other topics.

Dead Rhetoric: What advantages/disadvantages does Maniacult have in terms of recording, as you had to do it from a distance?

Sven de Caluwé: The disadvantage was that we weren’t together so we didn’t have that synergy that we usually have in the studio where we spend months working on the material and then we can go back and forth discussing different ideas and things to try/experiment. But we kind of worked that out since we did some extensive pre-production on all of the songs before recording them. We had everything recorded as demos, with real drums and vocals, before we went to the studio. We had to come up with a way to go around that.

The advantage, at least for me, is that I had as much time as I wanted to track the vocals. We recorded drums to a click, so as soon as the pre-productions were done and the songs were set in stone, I actually had the time span of weeks and months to record vocals. I could redo stuff and try out different things until I was completely happy. Sometimes in the past, you have 4-5 days to track the album and that’s it – you are done. Sometimes you get worn out after a few days, and the final product sounds fine on record but you yourself can hear the performance that you wanted to have out of yourself, so that can be kind of annoying. I think that was the advantage to the disadvantage.

Dead Rhetoric: So you could relax a bit more since you aren’t pressed for time as much.

de Caluwé: Yeah, absolutely. There was no touring going on and we had a deadline but it wasn’t as pressing as it usually would be. We took a lot of time with this record, and it was really beneficial in the end.

Dead Rhetoric: What do you feel stands out to you about Maniacult, compared to your more recent albums?

de Caluwé: I think it is a lot more dynamic. There’s a lot more stuff going on. We expanded things into a more schizophrenic record where there are a lot more things going on, I mean there is a piano song for fuck’s sake! There’s stuff we haven’t done in a long time. I think it’s a more well-rounded record where as we had been focusing in one direction with the last record, which was into a darker atmosphere. It’s present and worked out in this one, but there’s also some more groovier bits, catchy headbanging bits, some grindy bits, some more technical shit – it’s a lot of everything I guess [laughs].

Dead Rhetoric: At this point in Aborted’s career, where does the line sit with being consistent and having things feel fresh?

de Caluwé: We are always trying to push ourselves with something new, even if it is only subtle differences. There’s quite a bit of difference between Terrorvision and this record. There’s no point in doing the same record again. We know we have a box to play in, a box that we need to stick too, but we look at how far we can stretch the box out.

Dead Rhetoric: You have been having these gory, creepy videos. Do you feel that’s an established piece at this point?

de Caluwé: I think so. It’s been a part of the band since the start. We have always written about terrible things and doing terrible things. Even if it is a joking way. We take what we do very seriously, but at the same time, it’s all about fun as well. We always try to mix in our personalities. We really like horror and that sort of stuff. But we are also nerds so we want that in too. Ever since Retrogore, it’s been very present.

Dead Rhetoric: You have to have a bit of fun with it. Otherwise you are just talking about people doing cruel things to each other. It makes it more entertaining as opposed to disgusting.

de Caluwé: It’s goofy, and a lot of the songs have a serious message behind them. But we do this music to have fun. We have fun with our fans live. I think the best way to compare it is to some of the Sam Raimi movies. It’s horror but it’s also campy, goofy as fuck, and entertaining. If there was one movie that describes who we are as people, it’s probably Evil Dead.

Dead Rhetoric: From the lyrical stand point, is there a song or two that you really enjoyed writing?

de Caluwé: Honestly, all of them. But for various reasons. There are some really serious songs. “Dementophobia” and “Impetus Odi” deal with mental health issues, for example. And the crazy shit in the last few years, and I’m not talking about COVID – the stuff that in a fucked up world situation that people do, like dive into conspiracy theories and how quickly people become selfish in emergency situations – that kind of crap. Borderline personality disorders – it’s all in there.

Then there are songs that are absolutely not serious! We usually have one song about poop per record, and I made a terrible, terrible mistake about not having a shit song on Terrorvision, so this one has two! “A Vulgar Quagmire” and “Grotesque” are both about poopoo. I completely let go on that, and it’s probably the most ridiculous shit I have ever put to paper. I say, enjoy the ride!

Dead Rhetoric: Talk about the Maniacult Wayland Thurston action figure, and how you came about that idea?

de Caluwé: That guy is crazy man! He held me up at knife point to make the record about him so that’s why we did it. Honestly, it was a very reversed process where we usually come up with a concept, lyrics, and all that and I try to come up with a way to have some ridiculous pre-order item to get to the fans. It’s really nice for fans who have been collecting whatever we have been doing for the last few years, to get a ridiculous item that is special for those die-hard fans. It makes it worth getting the physical product.

This time around, being the retard that I am, I came up with the ridiculous idea first and came up with the idea around it. What I wanted to do was have an action figure, a new mascot for the band that was this crazy cult leader. He also had to be an ‘80s slasher and embody mental health issues. So we made the character and then made the artwork based upon that brief. Then we went to the action figure and had him made. It was actually quite a long process.

Dead Rhetoric: You’ve been using him over social media with Bob the Butcher from Vulvodynia. Has that been a fun way to spread the word about the new album?

de Caluwé: It’s been really fun. Vulvodynia were on board immediately – they are a great band and really cool people. So we have been doing this running gag together. It’s been interesting to have a completely new and different way to go about promotion. I also think it’s a really good idea to drag in other bands – in the end it’s a small scene and we are all together to have a good time and get our music out there, so why not give shout outs to the people that you know and like?

Dead Rhetoric: The other thing I saw with the merch – how did you get a blood-filled vinyl designed?

de Caluwé: There’s this company that does these really limited vinyls in the US. They did a slime-filled vinyl for The Black Dahlia Murder. They are friends of ours as well, so we wanted to have a blood-filled one. It’s also something I saw with the Friday the 13th vinyl. They did it for Part I I believe. I love horror soundtrack vinyls, so I saw that and felt it was right up our alley. We found a company and they do really limited stuff, so we only did 25 of them. I think they were sold in a matter of minutes. I mean…Wayland sacrificed a few people and spilled some blood into the vinyls, that’s the real answer!

Dead Rhetoric: What’s the essence of Aborted, now with over 25 years under your belt?

de Caluwé: I think Hemdale said it best back in the day, it’s delicious, gory fun.

Dead Rhetoric: Engineering the Dead just turned 20, what do you remember about the time of release for it?

de Caluwé: I was surprised we had a second album! We were very excited as it was quite a step up for us. It was the first time we were actually signed on an international label that was known in the metal scene. They had put out Soilwork, and they were really coming up then. We knew that it was going to get us exposed to so many more people. It was an exciting time and I’m still very proud of that record. I have very fond, fucked up memories from the studio. It was a good time, that’s for sure!

Dead Rhetoric: Is there anything that you have taken from your time with Aborted, that you feel you’ve learned from?

de Caluwé: Honestly, I think the biggest takeaway that I could give to any fan or musician is to have fun. You have to be serious about your art and do it properly. But if you aren’t having fun you aren’t doing it right.

Dead Rhetoric: Speaking of fun, what’s something you like to do outside of music?

de Caluwé: I’m a horror geek. I watch a lot of horror movies. I play a lot of video games because I’m a god damn nerd. I do sports and go to the gym. I try to work out. When the world is back in a normal state I like to go out drinking with my friends – that’s about it.

Dead Rhetoric: What plans do you have for 2021?

de Caluwé: We have some tours coming up next year. There’s already a European tour planned with The Acacia Strain, Benighted, Hideous Divinity, and Fleddy Melculy in Feb/March and hopefully we will hit the US in the summer of next year, I want to say.