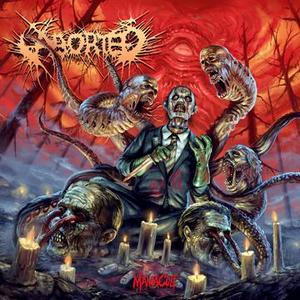 After moving into more textured and atmospheric horrorscapes for their last album, 2018’s TerrorVision, bring back a wealth of variety for their latest full-length in ManiaCult.  Certainly, Aborted has been one of the most consistent in the extreme community for most of this century to date, and ManiaCult lovingly dishes out chunky grooves, murky atmosphere, and grinding intensity in the best ways that Aborted is known for.

With the idea of ‘if it ain’t broke, don’t fix it,’ in mind, Aborted still find ways to keep their visceral formula sounding fresh.  Most notably this time in terms of the ‘grind’ element, which was less evident on their last release.  ManiaCult is a rolling ball of extremity, providing an intense listen and even equipping it with some of that dark atmosphere that TerrorVision reveled in.  Take the track “Drag Me to Hell,” which takes scathing and furious tempos but still finds a way to place in an equal emphasis on dark melodies and eerie atmospheric moods to create a track that can both splatter and unsettle you all at once.  Some tracks do go more in the grind-y direction, which is perfectly fine from Aborted, such as the frenetic “Grotesque” and battering “Impetus Odi.”  But the knack for grooves still reigns supreme, with some cuts like “Dementophobia” seeming to delight in mid-tempo stomps with playful little melodies adorning them.  It all adds up to a fast-paced album that delivers exactly what one would hope for in an Aborted release.

ManiaCult utilizes groove, grind, and pounding melodies with a murderous level of glee.  While it’s Aborted’s bread and butter in this regard, there’s no denying how absolutely pulverizing and enjoyable the experience can be.  A testament to the band’s ability to persist, now with over 20 years sitting behind them.  Nobody grinds and grooves as consistently as Aborted continues to.