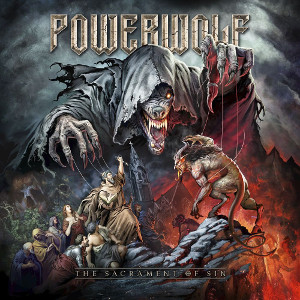 In a relatively scant 15 years, German act Powerwolf have taken the power metal world by storm. Be it through darker imagery that may be more King Diamond meets black metal than your average crew – they back up the look with a potent sound that keeps the hook-levels on high, encouraging the sing-a-long choruses to burst from speakers and audiences worldwide. The Sacrament of Sin is the band’s seventh studio record – embracing classic trademarks of pipe organs and tongue in cheek lyrical themes (“Demons Are a Girl’s Best Friend” for instance), while also pushing new themes of bagpipes and even a power ballad when necessary. It’s little wonder they’ve captured the attention of critics and also gained major chart action -hitting number one on the German music national charts for the second time in their career.

Choosing to switch things up a bit in terms of producer (Jens Bogren at Fascination Street Studios versus their long history with Fredrik Nordström at Studio Fredman) helps this seventh studio platter The Sacrament of Sin become more of an enhanced expansion into the diversity Powerwolf can deliver. You can expect eleven anthems of varying tempos and atmosphere – all aligning to the call to arms spirit of heavy metal that Powerwolf embrace, as bombastic and OTT as hoped for from the quintet.

The Sacrament of Sin keeps Powerwolf at the top of the power metal brigade – delivering what the converts desire, and taking them along a ride that’s entertaining continuously. Suspend reality, consume yourself in the horror-filled darkness of werewolves and religious lyrical themes with irony and humorous wordplay and it will be easy to understand why they’re not ready to relinquish their throne held high.

Check out our recent interview with Falk Maria Schlegel HERE.