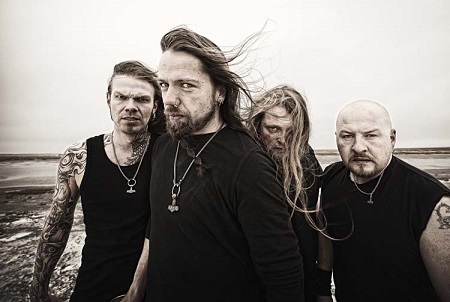 Faroe Islands’ own folk metallers TÝR have revealed the release date for their seventh full-length album, Valkyrja. The forthcoming effort is slated for release on September 17 (one day earlier internationally) through Metal Blade Records. Valkyrja‘s opening track, “Blood Of Heroes”, is available for streaming below via Youtube.

TÝR has collaborated with Jacob Hansen onace again at Hansen Studios in Ribe, Denmark for their forthcoming effort and along with Hansen — the band recruited acclaimed drummer George Kollias (NILE, NIGHTFALL) and LEAVES’ EYES vocalist Liv Kristine joined vocalist/guitarist Heri Joensen for a vocal duet on “The Lay Of Our Love”. George Kollias manned the drum kit during the recording sessions, filling in for former TÝR sticksman Kári Streymoy who parted ways with the folk horde two months ago.

Comments Joensen: “The woman that the warrior leaves may represent the earthly women. Freyja, The Lady Of The Slain, may represent the perfection of Women, and the Valkyrie is the link between the two, taking men from earthly to godly women.”